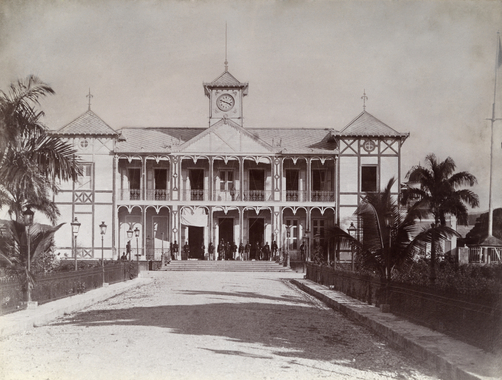 On this day in history, August 8, 1912, the Haitian National Palace exploded with President Cincinnati’s Leconte and much of his army inside.

Cincinnatus Leconte was a Haitian lawyer who served as minister of the interior to President Pierre Nord Alexis. He was forced into exile in Jamaica after a 1908 revolt deposed Alexis and gave François C. Antoine Simon the presidency. Returning from exile in 1911, Leconte gathered a large military force with the revolution outing President Simon and brought Leconte back to Port-au-Prince the victor. Leconte was unanimously elected president of Haiti by Congress and given a seven-year term. He took office in August 1911. Leconte led with a long  term period of unrest which caused the US to send warships and troops to protect American citizens and businesses.

Early in the morning on August 8, the National Palace was blown up and though it is not confirmed, many believe that this was an act by opponents to the central government. Leconte, who had been in power for less than a year, along with many soldiers, were killed in the explosion.

“So great was the force of the explosion, that a number of small cannon, fragments of iron and shell were thrown long distances in all directions, and many of the palace attendants were killed. Every house in the city was shaken violently and the entire population, greatly alarmed, rushed into the street.”

Some historians say that this event represents one of the greatest highlights of Haiti’s turn of the century political instability, convinced observers in Washington that an intervention would be imperative in the Caribbean Republic to put an end to the general anarchy in Haitian government affairs.

The cause of the explosion has been rumored to be started by powder magazines stored in the basement, while some think that the smaller explosions were a cover-up for an assassination. Military authorities took over and by the afternoon General Tancrede Auguste, Senator and ex-Minister of Public Works was named president. The final death toll may have reached 400 people.