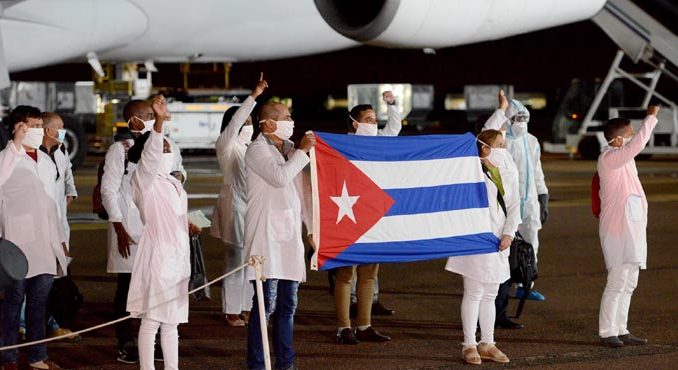 HAVANA, Cuba – The government of Cuba on April 26 sent 216 healthcare workers to South Africa to help the country in its fight against the COVID-19 pandemic.

The Communist Spanish speaking Caribbean island has, to date, sent around 1,200 healthcare workers around the world that have been particularly hard hit by the virus.

Cuba, which has confirmed ,1337 positive cases of the virus and 51 deaths, has one of the world’s highest number of doctors per capita and is renowned for its focus on prevention, community-oriented primary health care and preparedness to fight epidemics.

“The advantage of Cuba is that they are a community health model, one that we would like to use,” South African Health Minister Zweli Mkhize told a news briefing earlier this month.

The country has a special relationship with Cuba, which supported the fight against apartheid – a conflict that included Cuban troops who fought and died in southern Angola.

According to the Cuban embassy, South Africa has sent medical supplies to the island to assist in the fight against coronavirus in the plane that is now returning with the Cuban medical brigade.

“These are times of solidarity and cooperation. If we act together, we can halt the spread of coronavirus in a faster and more cost effective manner,” Cuba’s ambassador to South Africa, Rodolfo Benítez Verson, said in a statement.