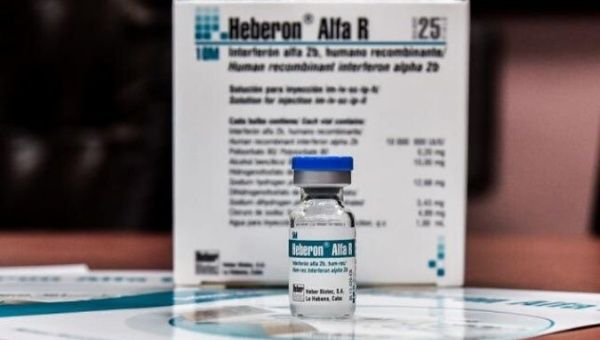 HAVANA, Cuba – Ask the authorities in China, South Korea, Germany, and Italy about the Cuban drug Interferon Alpha 2B—as their efforts at stemming the contagion of the novel coronavirus (COVID-19) are placed in the spotlight—and their response would reflect a more positive outcome.

Out of a confirmed infection rate of 8,000 persons in South Korea, 72 succumbed to the virus. In  Germany, just three persons died out of the 3,156 infected by this deadly virus, while the numbers in China, which was the epicenter of this pandemic, had approximately 3,500 deaths from a confirmed infection of close to 100,000 individuals.

Currently, a team of Cuban doctors alongside their Chinese counterparts, armed with the Interferon Alpha 2B, are in Italy to help that beleaguered nation in an attempt to stem a death toll rate, which is considerably worse than what was experienced at the height of the COVID-19 crisis in Wuhan, China.

Meanwhile, here in the United States, we’re scrambling to respond to COVID-19. We’re lagging behind in providing testing to citizens, many of whom researchers are saying may have already contracted the virus. In fact, scientists are saying the true numbers in the U.S. are way above the official Centers for Disease Control and Prevention (CDC) count of 10,442 cases and 150 deaths, up to press time.

When compared with other countries such as South Korea and Germany, the number of confirmed coronavirus-linked deaths in the U.S. is staggering. As states ramp up testing, the number of cases is expected to climb exponentially and we’re simply unprepared to handle a large-scale pandemic. The U.S. currently has no vaccines available and no established treatments. We’re in a race against the clock, and while the Federal government touts two potential treatments—the malaria drug Chloroquine and the experimental antiviral drug Remdesevir—Cuba’s Interferon Alpha 2B is being used successfully around the globe.

So what is this Interferon Alpha 2B, which is now being thrust on the world stage as one of the leading anti-COVID-19 drugs in response to the global pandemic? It is one of 22 drugs that has been developed in Cuba since 1986 by its Center for Genetic Engineering and Biotechnology (CIGB) and has been used as a treatment for HIV-AIDS, hepatitis B and C, herpes zoster or shingles, dengue and different types of cancers.

Interferons are ‘signaling’ proteins, explains Dr. Helen Yaffe of Glasgow University, an expert on Cuba. These proteins are produced and released by the body in response to infections and alert nearby cells to heighten their antiviral defenses. It is not a cure or a vaccine to COVID-19 but rather an antiviral that boosts the human defense system.

There are currently manufacturing relationships between the Caribbean island and China for this stellar product and it is highly recommended by medical specialists for its ability to fight the COVID-19 virus.  During the onset of the virus in Wuhan province, the Chinese authorities found it to be exceptional in destroying the virus from thousands of its citizens who had contracted this respiratory disease at the earliest stages.

Since the success of this antiviral drug has become public knowledge, Cuba has been flooded with requests from all across the globe, including, Africa, Europe, Latin and South America and Caribbean nations that make up the Organization of Eastern Caribbean States.