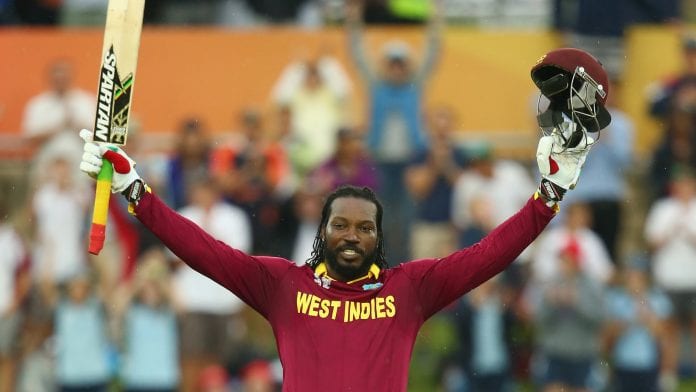 Chris Gayle hit his 18th T20 century, an unbeaten 54-ball 108 with six fours and 11 sixes, to lead the Jamaica Tallawahs defeat of 192 against Trinbago Knight Riders in Port-of-Spain, Trinidad. The win propelled Tallawahs to the top while Knight Riders slumped to their third loss in four games.

Gayle, who will be joining the U.S Hero CPL 2016 match at the Broward Regional Park at the end of July, opened the match with Chadwick Walton adding 29 in 35 balls. At the end of the Powerplay, Gayle was on a run-a-ball 17. Kumar Sangakkara brought the required impetus with a brisk 20, but his dismissal left Tallawahs needing 121 off the last 10 overs.

Gayle laid into the bowlers as the Tallawahs hit 71 off the next three overs. A 30-run 13th over from Sulieman Benn, including four sixes by Gayle, brought the Tallawahs within 50 of the target with seven overs left. Gayle and Andre Russell partnered a 107-run third-wicket stand. Russell contributed an 18-ball 24 before he holed out to long-off in the 17th over, but the Tallawahs easily looked to the goal with 10 balls to spare.

The Knight Riders were given a brisk start by Brendon McCullum and Hashim Amla, who anchored the innings with a brisk 74. Their 49-run stand was broken by a slider made by Imad Wasim that got past McCullum’s land into the off stump.

The Knight Riders scored 53 off the last four overs to finish with 191 but came up short to end the game.