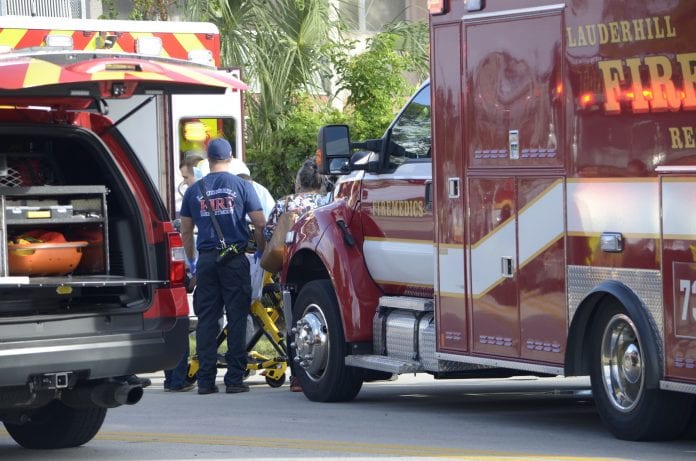 Panic struck the Ave Marie Friends Prep School in Lauderhill on Monday when shortly after served lunch, children were suddenly stricken with vomiting, diarrhea and nausea. The first child was stricken at approximately 2:00 pm and within minutes over 20 kids had fallen ill with similar complaints.

Some of the children were so badly affected with stomach gripes, and dehydrated from vomiting and diarrhea that they had to be taken to neighboring hospitals including Plantation General Hospital and Broward Health Coral Springs.

Checks by National Weekly on Tuesday bore out that all the chidren had been treated and released.

Lucy Burns, whose 4 yr old nephew attends the school, and lives in the vicinity of the prep school located at 5801 NW 19 Street in the City of Lauderhill, said she was coming home and saw the ambulances and fire trucks at the school and thought “there was a fire at the school.” She rushed there immediately and found some children were suffering from she Burns assumed was “gastroenteritis” a stomach ailment in which the symptoms are vomiting, nausea and dehydration.

When she checked on the condition of her nephew, Charlie, he was fortunately fine.

Calling the school on Tuesday, one of the owners, Rudy Ford, said the school which accommodates some 50 pre- school children aged 3 to 5 daily, was closed while the Child Protective Investigation Section of the Broward Sheriff Office and the Florida Department of Health i(FDH) investigates what caused the children to be so sick.

Ford said he couldn’t comment on what caused the children, including some from Caribbean-American families to be sick. “We are waiting on the outcome of the investigation to determine what caused the problem,” he said.

Burns said she was told by some of the parents of sick children that the problem was ether caused by food poisoning, or contamination, in lunch the children had hours earlier, and catered for an outside vendor. That information was verified by Lauderhill Fire Rescue’s assistant chief Jeff Levy who said it appeared the “common denominator” for the sudden illnesses was the lunch the kids eat.

Calls to the FDH bore no information on the determined cause of the illnesses, as “the department’s policy prohibits providing information on ongoing investigations..”

Ford said the school began operation in 2012. The principal is Ms. Carinita Rhone of Caribbean heritage. He  described the school as “having an impeccable record.”

At its most recent inspection in July 2015, as discerned from childcarecenter.us. the school was found to be in full compliance re staff requirements, including health requirements, discipline, facility/storage and indoor/outdoor space.