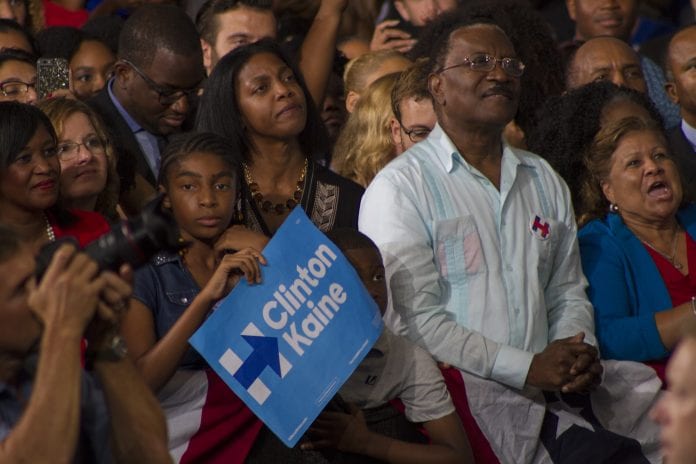 A National Weekly poll  205 registered Caribbean voters (124 Democrats, 61 NPA and 20 Republicans) residing in Palm Beach, Broward and Miami-Dade Counties conducted from October 17 to 20, indicates 67 percent plan to vote before November 8. Ten percent have already voted using the ballot-by-mail method, and only 9 percent said they were undecided if they’ll actually vote at all.

Asked why they plan to vote early rather than wait until Election Day, the majority, 84 percent, said they want to “make sure their vote is cast.”

Lola McIntosh said, “I am nervous about this election. I believe there could be problems on Election Day, especially with claims that outside forces could interfere with the elections. So, I’m going to vote early and avoid problems that could emerge on November 8.”

Other reasons given for voting early include “convenience”, 61 percent, and “more time to consider” when one is casting one’s vote, 34 percent. Granville Mills said “when I vote on an Election Day I feel pressured subconsciously as the polling station is usually crowded. During early voting I find I have more time to focus on all the items on the ballot which is quite long in general elections.”

During early voting, voters aren’t restricted to vote by the precincts that they are restricted to voting at on election day. Rather, voters are able to cast their votes at a location designated  by Supervisors of Election i(SOE) in the respective counties. These locations mostly include public libraries and civic centers,

Early voting in South Florida’s Tri-County region ends on Sunday, November 6, and runs from 7:00 a.m. to 7:00 p.m. daily. However, voters are advised to contact the SOE offices in their respective county to be assured of the exact voting times.

Representatives of the SOE offices in the three counties said they are expecting large crowds again this year especially during the first two days of early voting, the two weekends, particularly on Sunday October 23 and November 6.

“Churches usually organize ‘strong get-out-to the poll’ initiatives on the Sundays during early voting,” said Maria-Lee Rodriquez of the Miami-Dade SOE office. “We don’t expect this year to be different. With the intense publicity given to these elections since August, we are expecting and prepared for long lines of voters throughout the early voting period and, of course, on Election Day.”