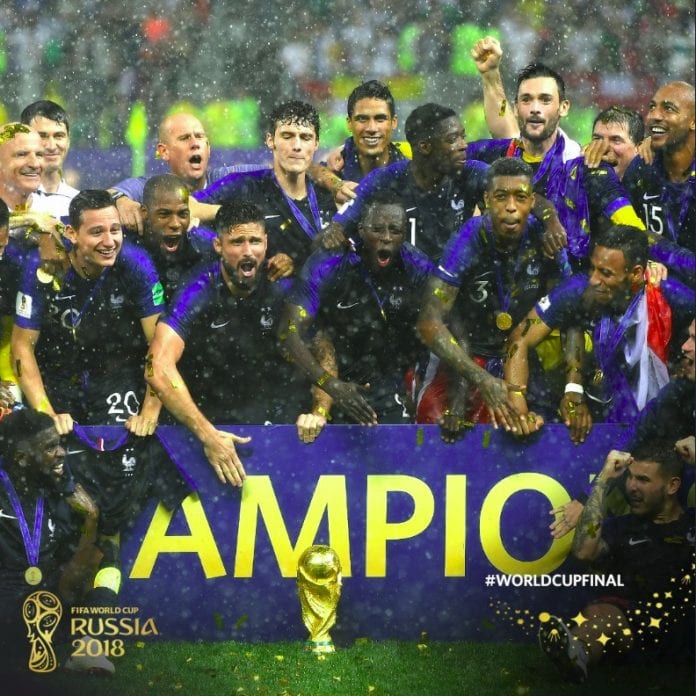 Judging from the flood of posts on social media on Sunday afternoon the overwhelming majority of Caribbean Americans shared in the euphoria experienced by the people of France with that country’s 4-2 win over Croatia in the 2018 World Cup Finals in Moscow, Russia.

Although most Caribbean American’s will quickly admit to Brazil being their favorite non-Caribbean team in this year’s World Cup tournament, with Brazil being knocked out earlier in the quarter-finals, most placed their support on the French team which consisted of several black payers from African countries.

“I wanted either England or France to win from the four semi-finalist of Belgium, Croatia, England and France,“ said 27-year old Brandon Murray of Plantation, Florida. ”Both France and England had talented black players. I would have loved England to win with so many Jamaican-roots players, but that wasn’t to be, so all my support went to France.”

“I am so glad the FranAfricans won the World Cup,” tweeted Simone Leslie from Boca Raton, Florida. “It’s a young team, and I believe this will be the Brazil of the next two World Cups at least. France forward Kylian Mbappe reminds me a lot the Brazilian football icon Pele that I have read so much about.”

France entered the tournament as a favorite, powered by its young stars including 19-year old Kylian Mbappe and Antoine Griezmann, and the team did not disappoint.

On their route to Sunday’s World Cup Finals they had beaten, Australia, Peru and drew with Denmark in the first round of matches. In the Round of 16 they had an impressive 4-3 victory over Argentina; beat Urguay 2-0 in the quarterfinals; Belgium 1-0 in the Semi-finals, and ultimately Croatia 3-2 in the Finals.

In Sunday’s game it appeared that Croatia had the better of the play for the first 18 minutes of the game, but luck was on the side of the French. At the 18th minute, Croatia striker Mario Mandzukic mistakenly scored a goal for France by heading it into his own team’s goal from a French fee kick.

Shortly after, Croatia’s Ivan Perisic scored, tying up the game 1-. Then, the Argentinian referee awarded France a penalty kick, for what turned out to be a controversial hand-ball committed by Perisic. While replay showed the ball hitting Perisic’s hand, it seemed to bounce from the turf to his hand, and was not handled deliberately. The referrer obviously in doubt if to award a penalty which the French players screaming for a penalty, consulted the  Video Assistant Referee (VAR) and what he saw prompted him to award the penalty kick..

Taking the penalty kick, France’s Antoine Griezmann did not miss. Scoring the goal France led 2-1 at the half.

In the second half, France’s Paul Pogba scored at the 59 minute mark, quickly followed the fourth goal scored by Mbappe six minutes later. Mbappe’s goal was the first scored by a teenager in the World Cup since Pele did so in 1958.

But Croatia continued pressing even with three goals down, and Croatia’s Mandzukic then scored 5 minutes later, based on a error by the French goal-keeper to take the score to 4-2, the final score.

Sunday’s victory was the second time France was winning the coveted trophy since it did so in France in the 1998 World Cup.