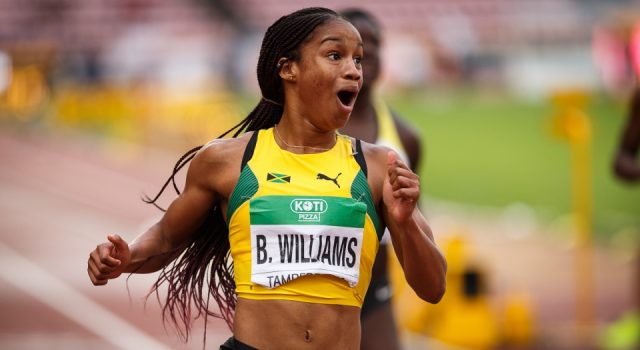 Jamaica’s ace young sprinter Briana Williams is excited to be relocating to Jamaica to train with Titans Track Club, which is led by Gregory Little and Olympian Michael Frater.

The move, which became public on Wednesday, means the 20-year-old Tokyo Olympic Games sprint relay gold medallist has severed ties with Trinidadian Olympian and her coach for the last 10 years, Ato Boldon.

Williams, who became the youngest athlete to win the sprint double at the 2018 World Under-20 Championships in Tampere, Finland, at 16 years old, thanked Boldon for his guidance over the years, even as she looks forward to the next chapter of her athletic story.

“I have to thank coach Ato for how much he has done for me and my career so far. He will always be a father figure to me,” Williams told the Jamaica Observer newspaper.

“I am excited about this new chapter and happy to be training in Jamaica,” added the South Florida-born track star.

She will join a camp which boasts athletes of the calibre of 2011 World Championships 100m gold medallist, and Olympic Games 100m and 200m silver medallist, Yohan Blake, as well as rising star Ackeem Blake and Kemar Bailey-Cole.

According to Boldon, Williams’ transition from his guidance was inevitable, and had always been on the cards.

“This is very necessary. We discussed this last year – the irony with all the ‘change coach’ chorus is that she was never supposed to be under me the whole way – not once was that part of the plan,” he told the newspaper.

“I am very proud of all that we did. She did things that hadn’t been done before and set or equalled a PR [personal record] every season,” Boldon added.

Under the Trinidadian’s watch, Williams succeeded at the World Under-20 Championships, the 2018 Carifta Games when she copped the Austin Sealy Award as the outstanding athlete, having captured he sprint double as well as being a member of the winning sprint relay team.

“We are very excited to work with Briana. She is a very talented athlete and we are looking forward to working with her,” he said.