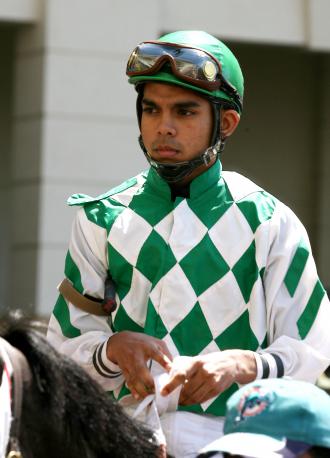 Jamaican jockey Jermaine Bridgmohan broke into double figures at Indiana Grand on Thursday when he logged a double on the 11-race card in the American midwest.

The 32-year-old won with favourite Mongolian Humor in race five and with 13-5 chance Happy Sonrisa in race seven, to move to 10 wins from 46 mounts for the season.

After finishing last and then second from last in his two previous rides on the card, Bridgmohan tasted success over a mile, pairing with five-year-old chestnut mare Mongolian Humor to crush the three-year-old and upward fillies and mares by 10-½ lengths.

Mongolian Humor pressed the early pace set by 5-1 chance Queenofcatniphill and 17-2 bet Bloody Mary Mornin before snatching the lead on the far turn and drawing off impressively to dominate the stretch run.

Graceful Choice, the longest shot in the field at 67-1, produced the early splits of 24.10 seconds for the quarter and 49.84 for the half as Atalanta Belle chased under pressure from Mavalous Mavalous.

Bridgmohan found himself starved for racing room at the quarter pole but shifted the filly to the outside heading into the stretch before reeling in the leaders and getting to the front at the sixteenth pole.

Bridgmohan is the younger brother of the well known Shaun Bridgmohan who has notched over 3 300 wins in a stellar career.

The season at Indian Grand began June 15 and runs until November 18.