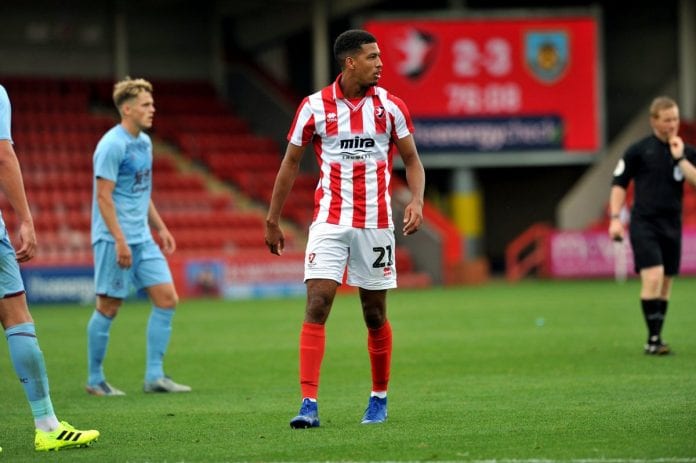 LONDON, CMC – Striker Jonté Smith took a huge step towards becoming the fourth Bermudian to appear in a Wembley Stadium final when he helped Cheltenham Town secure a 2-0 win away against Northampton Town in the first leg of the English League Two play-off semi-finals.

The 25-year-old Bermudian was introduced as a 74th-minute substitute at Sixfields Stadium in Thursday’s match, with his side already 1-0 up, and did not take long to make a telling impact.

A jinking run from the left with four minutes of normal time remaining, carried Smith into the box and his shot ricocheted to Sean Long whose low strike was deflected into the path of unmarked Conor Thomas, who made no mistake from close range.

It was a hammer blow for Northampton, who had chased the game from the 26th minute, when Charlie Raglan netted with a glancing header at the near post from a corner.

Cheltenham had earlier ridden their luck and would have gone behind but for a superb penalty save by Owen Evans in the 20th minute.

The second leg will be on Monday and Cheltenham, who are unbeaten against Northampton in their past five meetings, will fancy their chances of a Wembley final against either Exeter City or Colchester United, who hold a 1-0 lead after Thursday’s other semi-final.

This was the teams’ first competitive action since football was stopped because of the COVID-19 pandemic more than three months ago.

Cheltenham, who were fifth at the time of the enforced break, had their position amended to fourth on average points per game when the Football League determined the league season could not be completed.

It meant the Gloucestershire side would be pitted against the seventh-place team in the play-offs and gain home advantage for the second leg.

Smith’s contract with Cheltenham – nicknamed the Robins – was due to expire on June 3, but he agreed to extend the deal for another month, ensuring he would be available for the play-offs.

He is hoping to follow in the footsteps of fellow Bermudian Nahki Wells (Bradford City), Kyle Lightbourne (Stoke City) and Shaun Goater (Rotherham United and Manchester City) in reaching a Wembley final.

Of the three, Wells – now at Championship club Bristol City – is so far the only Bermudian to score at the world-famous London venue, in Bradford’s 3-0 League Two play-off final triumph over Northampton in 2013.