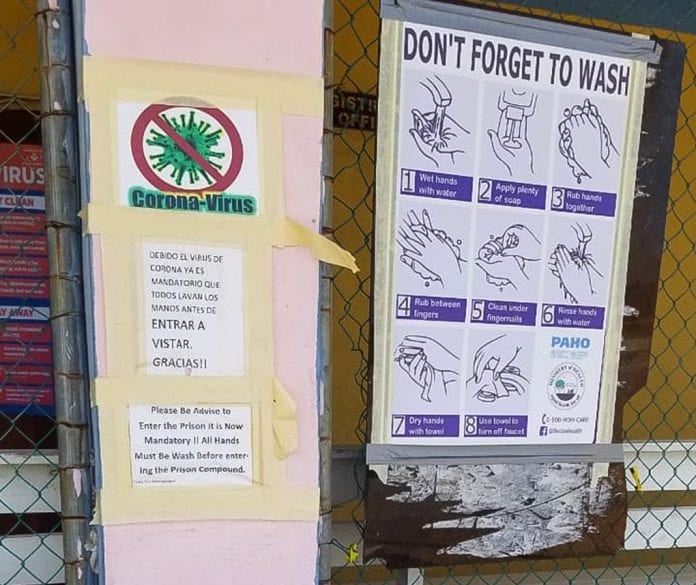 Prison authorities have confirmed plans to shut down Hattieville prison, the sole correctional facility in Belize, on Tuesday next week, amid concerns of the spread of the coronavirus (COVID-19).

The authorities at the Belize Central Prison confirm that more positive cases of the virus have been detected among prisoners and wardens and up to Friday night, five new cases were confirmed among ninety samples, bringing the number to 21.

Media reports said that a prison warden died on Thursday, though his cause of death has still not been confirmed.

The prison has since instituted complete confinement of all inmates for their own safety, and according to the Director of Health Services, Dr. Marvin Manzanero, the data shows that “ we do have eight prisoners that have turned up [positive]…and that is mostly as a result of the sweeps done on Tuesday and Wednesday of this week.

“This would include the initial persons that have been identified and then the further ones identified earlier in the week.”

The non-profit, non-governmental organisation, the Kolbe Foundation, which has managed the prison since 2002 said it has established various quarantining units within the prison to curb the spread of the virus.

The chief executive officer at the Foundation, Virgilio Murillo, said positive persons are not being allowed to co-mingle with the general population.

“Absolutely not. They have to wait that out until 14 days and then we will have them do another test, a PCR test and depending on what that result is, it will determine whether you take them out and put them back in the main population or you keep them for a further fourteen days if they are positive,” he said.

“The biggest concern of mine has always been the prison staff when they are on their day off or when they leave the prison to go home. They would act irresponsibly and go mingling with people who may possibly have the virus and then bringing it into the prison and infecting their colleagues and of course the inmates because inevitably they have to interact together.

“So that is always my biggest concern and I keep emphasizing to staff that, you know, they must stay at home if they don’t need to go anywhere and of course practice all the other measures that are in place to prevent COVID-19.”

Murillo said that the Kolbe Foundation in conformity with regional best practices, is doing its best to prevent an outbreak of the virus behind prison walls.

“The only thing we haven’t really been doing here is offering what you call video calls for prisoners and their loved ones. They maintain telephone contact which is also one of those options available.”

Meanwhile, the health authorities have confirmed that Belize recorded one death from the virus over the past 24 hours, pushing the total to 35. It said that the woman in her 40s who had underlying health conditions and had just been identified as a positive case.

“I can tell you that there are two other cases and who were swabbed because they died either on their way to the hospital or upon arrival in the last twenty-four hours. Those persons have also been swabbed and we are pending for those results, so we have three other deaths that we are investigating,” said Dr. Manzanero.

The health authorities said 54 new cases were reported on Friday and that the total now stands at 2,427 with 905 being active cases.