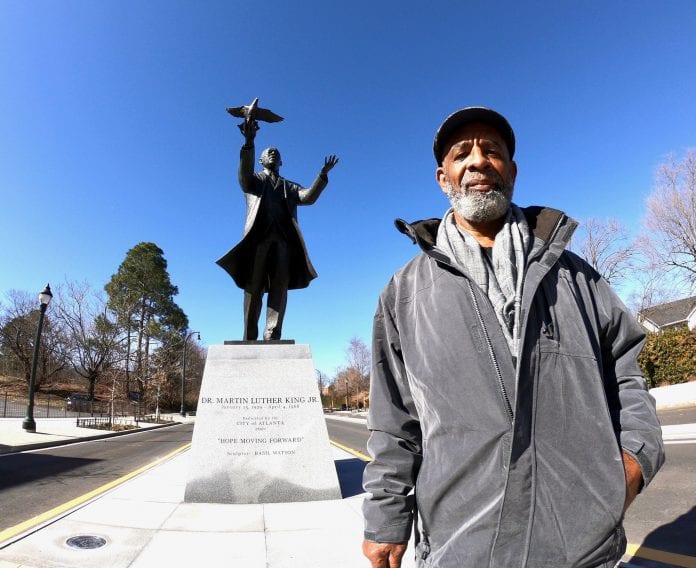 Ahead of Martin Luther King Jr Day 2021, the City of Atlanta has unveiled the new statue of the civil rights activist, created by Jamaican-born artist Basil Watson.

The statue stands at the intersection of Northside Drive and Martin Luther King, Jr. Drive across from Mercedes-Benz Stadium.

Basil Watson, the renowned Jamaican sculptor who created the statue, said it was a “dream come true” when he was chosen by the City of Atlanta to create a larger-than-life statue.

“You start your career dreaming of possibly doing something significant that impacts the world but you never really think about what it can be or if it can really happen. This is like a dream come true because it not only affects my world. I think this will have an impact on the world in general,” Watson shared.

He was chosen from a pool of 80 talented artists for the project. The statue took two years to complete and features Dr King releasing a dove. Watson said the work is a representation of his concept of MLK. “It was an evolution in terms of my concept of what Martin Luther King represents and the key message that he wanted to present to the world,” Watson said.

While many Jamaican-Americans in Georgia are being introduced to Watson’s work for the first time, those living on the island know his statues well. He is the hands behind several major statues, including monuments of sprinters Usain Bolt, Shelly-Ann Fraser-Pryce, Merlene Ottey, Herb McKenley, Asafa Powell and Veronica Campbell-Brown, all at the National Stadium.

Last year, his monument of Louise “Miss Lou” Bennett-Coverley was unveiled in Gordon Town, St Andrew. Another statue of Usain Bolt, to be erected his hometown of Falmouth, Trelawny, later this year, was also done by Watson.

A long-time resident of Georgia, Watson plans to return to Jamaica where he will open an art academy to assist young Jamaican artists.

Watson was awarded the Order of Distinction (Commander Class) in 2016 by the Jamaican government for his contributions to Jamaican art and culture.