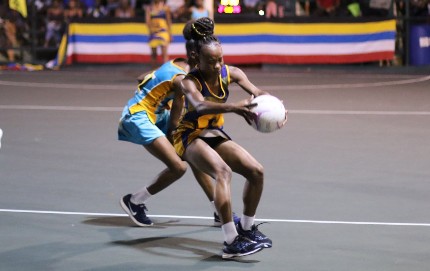 With scores locked 13-all at halftime and 18-all at the end of the third quarter, Barbados out-scored the St Lucians 11-7 in the all-important last stanza to snatch an amazing victory at the YMCA Sports Complex.

They were led by goal shooter Sumara Benn who netted 17 from 24 attempts, including six from eight in the final quarter. She received outstanding support from goal attack Chiara Chase who was perfect in shooting eight from eight attempts, with five coming in the last quarter.

For St Lucia, Dasha Eugene led with 20 goals from 25 attempts, netting nine from 12 in the first half to keep St Lucia in the contest.

With the success, Barbados topped the standings with 30 points, four clear of Trinidad and Tobago who finished second while St Lucia were third on 22.

Despite missing out on the title, T&T finished the tournament on a high when they defeated Grenada 33-20. For Grenada, goal shooter Kalidah Andrew led the scoring with 16 from 21 attempts.

In the other game played Dominica dominated Bermuda, 36-23, with goal shooter Treneese Hamilton inspiring the winners with 25 goals from 35 attempts.

Dominica were fourth on 17 points, Bermuda ended fifth on 12 while Grenada were sixth on nine points and winless hosts, Antigua and Barbuda, last without a point.

Defending champions Jamaica, who are 12-time winners, missed the tournament.