Barbados Prepares to Shut Down as Tropical Storm Dorian Approaches 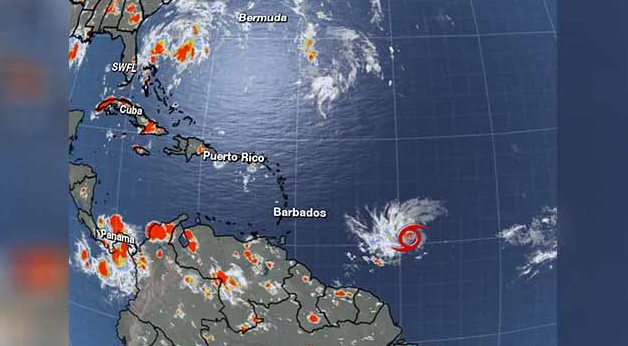 BRIDGETOWN, Barbados, CMC – The Barbados government has announced plans to shut down the island as Tropical Storm Dorian draws closer to the island.

A government statement said that the shutdown procedures would begin at 10.00 am (local time) and that “only essential services in the private and public sectors should open today”.

Home Affairs Minister, Edmund Hinkson has called on Barbadians to be off the streets no later than noon and that the last Transport Board bus to any destination will leave the bus terminals at 11:00 a.m (local time).

“According to the Policy Framework and Standard Operating Procedures for the Systematic Shutdown and Reactivation of Barbados, essential services in the private sector are: utility companies, supermarkets, mini-marts, shops, pharmacies, general stores including hardware stores and lumberyards, companies that provide public transportation and telecommunication providers,” the government statement said.

In its latest bulletin, the Miami-based National Hurricane Centre (NHC) said that Dorian was getting “better organised” and is expected to bring tropical storm conditions to the Windward Islands later on Monday.

The NHC said that Dorian is moving toward the west near 14 mph and a turn towards the west-northwest is expected later Tuesday, with this motion continuing through Tuesday night.

Hinkson said that staff of the Sanitation Service Authority, the Ministry of Public Works and Maintenance, the National Conservation Commission and the National Housing Corporation will also be deployed to continue the clean-up ahead of the storm’s impact.

“All other government employees in services not essential would not be required to report for work,” he said, noting that senior public servants are expected to ensure the security of government property within their respective domains.