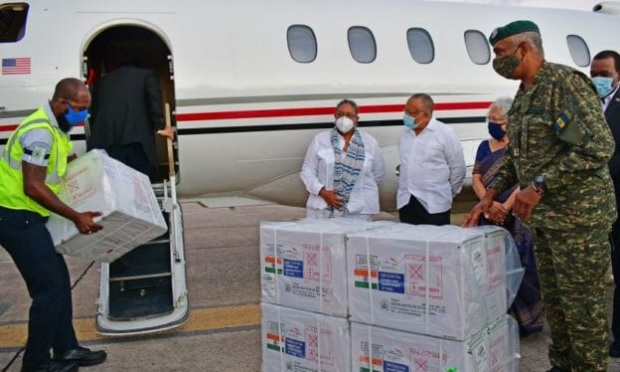 Barbados and Dominica intend to share with their Caribbean neighbours, some of the COVID-19 vaccines sent by the government of India, Prime Minister Mia Mottley said on Tuesday evening.

A Regional Security System (RSS) aircraft arrived at the Grantley Adams International Airport earlier in the day with a shipment of 100,000 doses of the Indian-manufactured Oxford-AstraZeneca, while 70,000 doses were sent to Dominica.

Organisation of Eastern Caribbean States (OECS) member nations, as well as Guyana and Trinidad will benefit from India’s gift, Mottley said, as she emphasized that collaboration was key in the fight against COVID-19 and acknowledged Dominica’s Prime Minister Roosevelt Skerrit for his role in the overall effort.

“Prime Minister Skerrit and myself have worked very closely on this, and I really want to thank him….As we have benefitted, we’ve also agreed that members of the OECS, and indeed, in Barbados’ case, Trinidad and Guyana, who have helped us over the course of last year…that some of the vaccines we have received will go to our brothers and sisters in those territories,” she said.

“I hope that Barbados, Dominica and the rest of the Caribbean can be an example to the rest of the world about how you cooperate. And even when you have a little, you share and you work together, because we know that’s the only thing missing in the world today.”

Meantime, Prime Minister Mottley disclosed that negotiations were underway with the government of India to buy a second batch of the vaccine for Barbadians.

“These are part of the first batch of a potential 200,000 doses for Barbados. We are asking and hoping that we can purchase the remaining 100,000 from the government of India,” Mottley said.

“We are still in negotiations for that second batch but we really want, at this stage, to say ‘thank you’ to the people and government of India. Truly this has been a very special moment for our people.”

Prime Minister Mottley also insisted that the vaccine was “highly safe and effective”.

“These are not my words but the words of thousands of key scientists and medical experts across the world. It has gone through the most rigorous testing and approval protocols,” she assured, while noting that the vaccine was being administered to populations in four continents – Europe, Asia, South America and Africa.

Mottley added that the Oxford-AstraZeneca (COVISHIELD) vaccine was not the first pharmaceutical product manufactured in India that Barbadians would be using.

“Indeed, many of the most common drugs and medicines used by Barbadians for a plethora of ailments and illnesses are manufactured in India,” she noted, stressing that India has distinguished itself as one of the world’s most accomplished pharmaceutical manufacturers, and has served hundreds of millions of people across the developing world and the developed world.

“Our confidence in the skill, the science and the standards of the manufacturers in India is unshakable,” she added.

Emphasizing that Barbados was in a race against time with respect to variations and mutations of the vaccine, Prime Minister Mottley explained why the COVISHIELD vaccine was the most suitable one for Barbados.

“We believe that with all the vaccines that are out there, this is one of the most suitable ones for Barbados and other tropical nations like our own, because the temperatures required for storage are not as rigorous as some of the other vaccines. Although we are ensuring that if necessary we’re in a position to also be able to store some of the more rigorous ones that require minus 80 degrees.  This one, however, is stored at temperatures that we are accustomed to in our country,” she said.

Also supporting the use of the COVISHIELD vaccine was Prime Minister Skerrit, who joined the press conference via Zoom.

Sharing the latest research on the Oxford-AstraZeneca vaccine, he said: “Oxford University reports that the protection provided by the first dose of the Oxford-AstraZeneca vaccine kicks in after three weeks and last right the way through to the second dose at the three-month mark. Guided by the results of the latest studies, this vaccine will reduce the likelihood of transmission to others.”