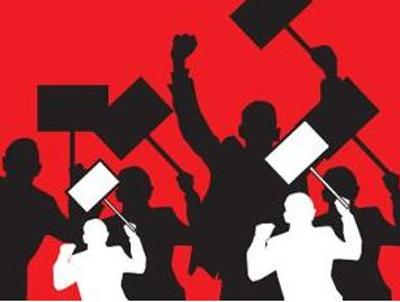 Trade union leaders, as well as the private sector, have called on Barbadians to participate in a national strike on Monday.

At a news conference last Friday, General Secretary of the Barbados Workers’ Union, Toni Moore and the President of the Barbados Private Sector Association, Charles Herbert said this protest is an effort to pressure the government concerning the National Social Responsibility Levy.

The officials urged local businesses to allow workers to participate in the event.

They also sought to assure the nation that the joint action will not affect the main ports of entry or the state-run Queen Elizabeth hospital.

The unions have been protesting the 400 percent hike in the levy. Hundreds recently voiced their dissatisfaction by participating in a protest march. The march was organized by the Barbados Workers’ Union, National Union of Public Workers, the Barbados Union of Teachers and the Barbados Secondary Teachers’ Union.

The unions gave the Government a two-week ultimatum to accede to their request and vowed to take industrial action if nothing was done.

Fakes messages. Not from PM Stuart

Meanwhile, Barbadians have been advised that fraudulent messages attributed to Prime Minister Fruendel Stuart have been circulating on Facebook and by cell phone.

According to the PM’s Office, there have been several attempts to send fake messages or engage persons via Facebook Messenger in conversation. Attempts have even been made to solicit money with false promises relating to a fictitious United Nations grant by an individual or individuals purporting to be the Prime Minister.

These messages were accompanied by a photo of the Prime Minister.

“Persons are therefore being urged to be vigilant in the face of these forged messages. People are asked to report any such occurrence to the Fraud Department of the Royal Barbados Police Force,” said the PM’s office.

In the case of Facebook misuse, the public has been advised to use the “Report” button on the Fake Page to alert Facebook directly about the fraudulent activities.

Those who want to contact Stuart’s office officially can do so by calling or sending written correspondence to his office.