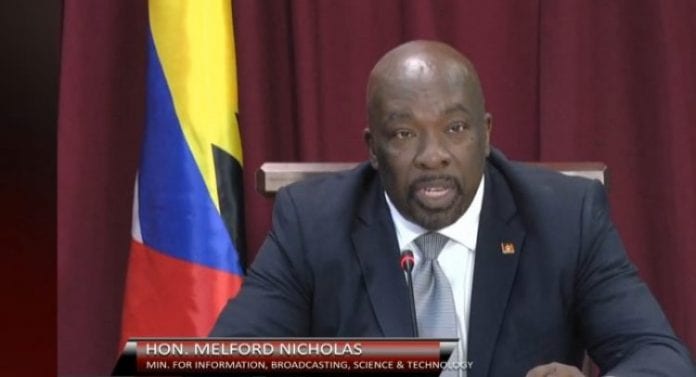 The Antigua and Barbuda government says China remains an “important development partner” and has condemned “persons who ought to be more responsible” for seeking to spread paranoia with the relationship with Beijing.

“They are an important partner of ours,” Information Minister Melford Nicholas said, insisting that there are people “why are trying to give an impression the sky is falling’.

Nicholas’ statement comes following the arrival last week of more than 150 Chinese nationals on board a chartered flight.

A statement issued after the weekly Cabinet meeting had said that the 56 Chinese, who arrived here on a China Eastern Airways Charter last Wednesday “was a routine rotation of employees of CCECC- the firm which is building the (Chinese) Embassy on Marble Hill, and the Cargo Port at the Deepwater Harbour.”

The statement had noted that “social media became abuzz with speculation and false reports, which the Cabinet feels compelled to address” and noted that Foreign Minister, E.P Chet Greene, had apart from informing Cabinet on the issue, had provided a 15-minute radio interview to clear up the issue.

“The charter, following its discharge of passengers, left Antigua for China with 163 Chinese nationals on board. There was a routine rotation of employees of CCECC—the firm which is building the Embassy on Marble Hill, and the Cargo Port at the Deepwater Harbour.

“CCECC has also been involved in construction projects in Antigua for more than 35 years, including the Creekside Bridge, the Multi-purpose Center, the Sir Vivian Richards Stadium, the V.C. Bird Air Terminal, and other construction projects,” the statement said, adding that the Chinese company is also building its Americas and Caribbean Headquarters here “to which several of the arriving workers are assigned”

Nicholas, speaking on a local radio station, said “China remains an important partner to the government and people of Antigua and Barbuda and there is a growing level of paranoia that is being stoked by people who ought to be more responsible and to try to give an impression that the sky is falling.

“We host World Cup 2007 in the Caribbean of which Antigua was very much a part of the proceedings. That brand new stadium was a gift from the Chinese government and there are a legion of projects that have been granted to us and have been supportive of us from the government and people of China.

‘We want people to be mindful and we can go back as far as the 1950s where the Chinese have played a role in the development of many aspects of the Caribbean,” Nicholas said.

The United States has been urging Caribbean countries not to accept gifts from China and on his recent visit to Guyana, US Secretary of State Michael Pompeo reiterated the message.