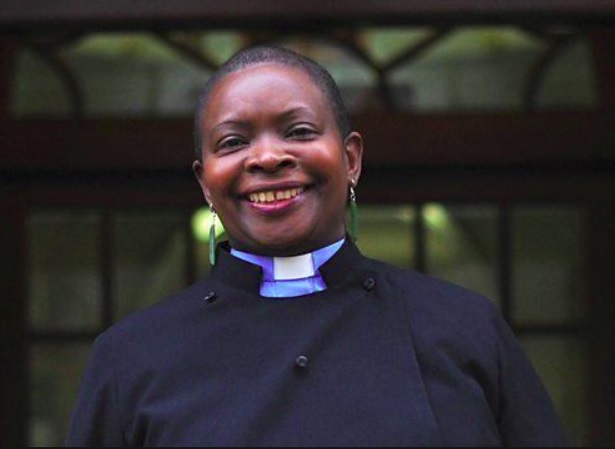 Last Saturday moments after the conclusion of the wedding of England’s Prince Harry to American actress Meghan Markle, trending on social media was that one of the participating priest is a Jamaican.

It is true that the Rev. Rose Josephine Hudson-Wilkin, a member of Church of England (Anglican) Diocese in London,  who led the congregation at the Royal wedding is a Jamaican.

Rev. Hudson-Wilkins was born in Montego Bay Jamaica in 1961, was resided by her father, and an aunt, attended Montego bay High School for Girls, and later migrated to England where she trained and became an Anglican priest.

Currently she holds the prestigious position as Chaplain to the Queen of England, Queen Elizabeth II. She’s also Chaplain to the Speaker of the House of Commons, priest vicar at the famous Westminister Abbey, and the presiding priest of the St. Mary-at-Hill Anglican church in London.

She’s is a strong proponent for women priests playing a more prominent role in the Anglican church and it is considered she could be among the first women to become a bishop in the Church of England.

When at the young age of 14 she decided to become a minister she said it was “because I had a strong calling and sense that this was what I was supposed to do.”

At the age of 21, in 1982, Hudson-Wilkin went to England to begin her ministerial training at the Church Army college in the West Midlands. In 1991 she was ordained in the Church of England as a deacon, and assigned as the parish deacon of St Matthew’s Church, Wolverhampton until 1994 when she was ordained a priest.

Serving at St. Matthews until 1995, she stepped up the clerical ladder to serve as assistant curate of St. Andrew Church, West Bromwich from 1995 to 1998.

Progress in the Church of England

In 1998, she became vicar of Holy Trinity Church, Dalston and in 2000 vicar of All Saints Church, Haggerston, an inner-city parish in Hackney, London. She was the first woman and person color to lead that parish . While there she once sat on the roof of the church for 24-hours to demand that the church leaky roof, and other flaws, be repaired.

In March 2013, she was made a prebendary of St Paul’s Cathedral in recognition of “her service to the Church and community” and in October 2014 was assigned as Priest-in-Charge of St Mary-at-Hill, City of London.

Although climbing up in the ranks of the Church Of England as a black person, and a woman, Rev. Hudson-Wilkins was a strong advocate for racial and gender equality.

She once said as a woman “I have to be twice as good as a man; and being black, three or four times as good as a white person.”

She is a vocal supporter of women in the church, and advocate for female bishops in the Church of England. She was actively involved in the process that resulted in the Church voting in 2014 to accept women as bishops..

In an interview preceding the Church’s vote on the ordination of women bishop she said, “I believe that we hold certain prejudices about certain things and we believe them to be true…What I want is for people to be open to the possibilities that their minds might be changed…..I think the church has been the poorer actually for not having the gifts of women – men and women – in its leadership.”

Rev. Hudson-Wilkin is married to Ken Wilkin who is also a Church of England priest, serving as Chaplain in Downview Parish. The couple has three children.