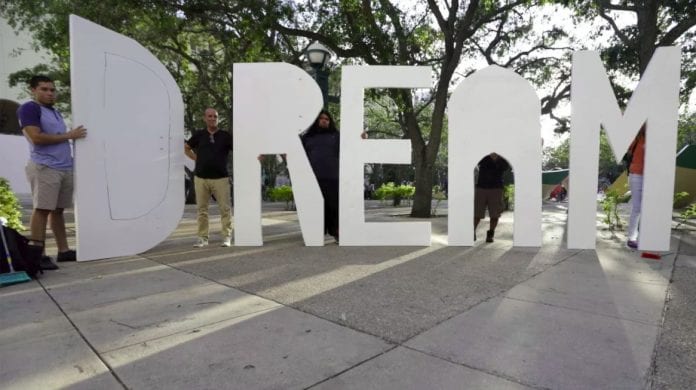 Democratic leaders Nancy Pelosi and Chuck Schumer met with President Trump and Republican leaders at the White House last Thursday for 2018 budget bill talks, presumably to see how far apart the parties are about budget priorities in the coming year. Among other demands, the Democrats want DACA (Deferred Action for Childhood Arrivals) protection included in the budget plan to safeguard Dreamers before the DACA program (which was cancelled by Trump in September 2017), ends permanently in March 2018.

Opposition to tagging DACA to budget

Trump and the Republican leadership oppose attaching immigration legislation to the bill, with the Trump Administration even releasing its own immigration demands recently, called “Immigration Principles and Policies”, providing an outline of the Trump administration’s proposals on immigration.

The immigration principles were sent to Congressional leaders with a cover letter demanding that any DACA legislation also include Trump’s outlined immigration reforms as well. The principles include border, interior security and more extreme demands to overhaul the U.S. immigration system and eliminate most family immigration categories, all provisions of the controversial RAISE Act, currently pending in congress.

Willing to shut down government over DACA

With the government shutdown looming, both sides agreed to a short extension of budget funding through December 22, 2018, to keep the government open. However, last Friday, Democratic leader Pelosi told reporters that Democrats are prepared to allow the government to shut down if Republicans refuse to include DACA protection and other demands in the bill. Pelosi also made it clear that Democrats would agree to reasonable border security measures, but never agree to extreme immigration reforms contained in the RAISE Act which would restrict legal immigration, even at the expense of protection for Dreamers.