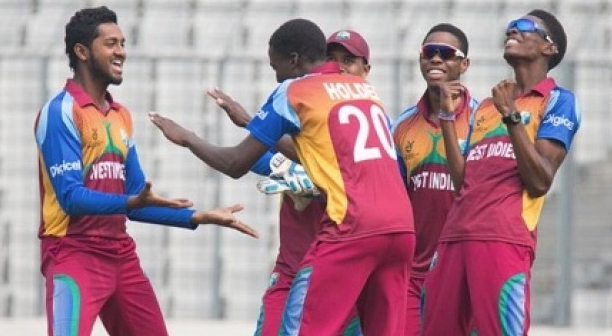 Underdogs West Indies Under-19 stunned favorites India Under-19 by five wickets in a low-scoring final of the ICC Youth Cricket World Cup to crown themselves world champions for the first time in their history.

Chasing 146 for victory at the Sher-e-Bangla National Stadium, the Caribbean side were reduced to 77 for five in the 29th over, before they were bailed out by a brilliant unbeaten half-century by Man-of-the-Match Keacy Carty to get home in the last over with a mere three balls to spare.

Carty stroked an unbeaten 52 off 125 balls with two fours and added a precious 69 in an unbroken sixth-wicket stand with the consistent Keemo Paul, who struck a busy 40 not out off 68 deliveries with a four and a six.

Entering the final over of the game with three runs needed, Paul got the winning runs when he charged seamer Khaleel Ahmed and top-edged a pull over the wicketkeeper for four to spark wild celebrations in the West Indies camp.