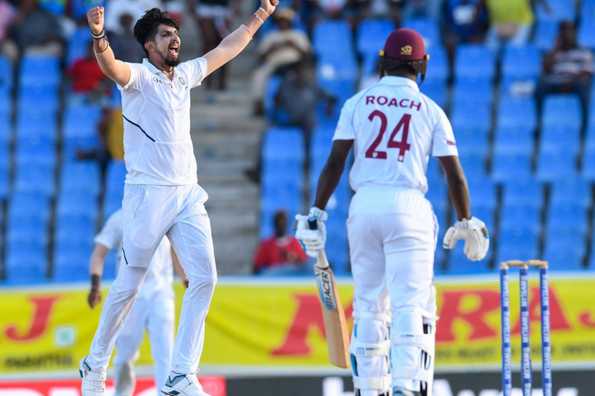 NORTH SOUND, Antigua, CMC – West Indies reverted to a familiar, albeit frustrating theme, on Friday, producing a feeble batting effort to leave powerhouses India in control after the second day of the opening Test at the Vivian Richards Cricket Ground.

Replying to India’s first innings of 297, the home side were tottering on 189 for eight at the close, still 108 runs in arrears heading into Saturday’s pivotal day three.

Roston Chase top-scored with an attractive 48 and Shimron Hetmyer got 35 but both were dismissed in a wretched final session where West Indies lost five wickets and added 107 runs.

Much of the damage was done in the day’s final 25 deliveries when veteran seamer Ishant Sharma unleashed a devastating salvo to claim the wickets of Shai Hope (24), Hetmyer and tail-ender Kemar Roach (0) to finish with five for 42.

Ravindra Jadeja had earlier led an India fightback with a valiant 58 as the visitors were dismissed on the stroke of lunch, after resuming the day on 203 for six.

Starting the morning on three, the right-hander struck six fours and a six off 112 deliveries in just over 2-3/4 hours to ensure India added a further 94 runs in the first session before the innings closed.

The final score represented an excellent turnaround for the visitors whose innings lay in ruins at 25 for three inside the first 45 minutes of Thursday’s opening day, after they were asked to bat first.

That miserable trend seemed poised to continue when left-hander Rishabh Pant added just four to his overnight 20 before edging seamer Kemar Roach (4-66) to captain Jason Holder at second slip in the morning’s second over.

But Jadeja stood firm and crucially, added 60 for the eighth wicket with tail-ender Ishant who made a valuable 19 off 62 balls, to frustrate West Indies for the remainder of the first hour.

Ishant eventually perished half-hour before lunch, bowled by a slower ball from speedster Shannon Gabriel (3-71) and Mohammed Shami failed to score when he scooped the first ball he faced back to off-spinner Chase (2-58) in the next over.

Jadeja, however, put on a further 29 for the ninth wicket with Jasprit Bumrah (four not out) before finally top-edging a Holder short ball to wicket-keeper Hope running back.

Starting their reply after lunch, West Indies were propelled by the free-scoring left-handed opener John Campbell who stroked 23 off 30 balls with four fours to inspire a 36-run opening stand with the obdurate Kraigg Brathwaite (14).

Almost against the run of play, Campbell became the first victim of the innings 40 minutes after the resumption when he inside-edged a half-hearted drive at a full-length delivery from pacer Mohammed Shami onto his leg stump.

Brathwaite, meanwhile, never settled and drove the 51st delivery he faced back to Ishant who reached low on his follow-through to take an excellent catch.

And 16 balls later with only two runs added, debutant right-hander Shamarh Brooks departed for 11 when he edged a cut at left-arm spinner Jadeja and was caught at slip by Ajinkya Rahane after the ball rebounded from the leg of wicketkeeper Pant.

Chase and Darren Bravo (18) then combined in a 38-run fourth-wicket stand which took West Indies to tea without further loss on 82 for three.

Bravo looked to be positive, driving Shami through mid-off for four for his first scoring shot before clearing the ropes at long-on with Jadeja.

However, he failed to add to his tea score, shuffling across to a straight delivery from seamer Bumrah and perishing lbw in the second over after the interval at 88 for four.

Chase attempted a rescue mission with Hope in a 42-run, fifth-wicket stand, striking five fours and a six in an innings lasting 74 balls and a shade over 90 minutes.

But with an eighth Test half-century in sight, he worked an innocuous delivery from Ishant off his pads and straight into the lap of KL Rahul at short mid-wicket, to depart at 130 for five.

Hope put on a further 44 for the sixth wicket with Hetmyer before edging one from Ishant that straightened, to be caught low down by Pant, triggering a slide that saw the last three wickets tumble for just five runs.

Hetmyer, who struck three fours in a 47-ball knock, drove a return catch to Ishant three overs from the close and Roach survived just three balls before edging to Virat Kohli at second slip.