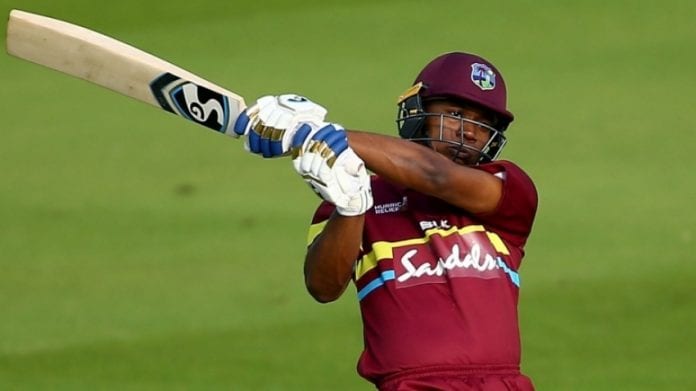 ST GEORGE’S, Grenada,  CMC – Opener Evin Lewis scored a century on the third One-Day International hundred as West Indies completed a whitewash of Ireland with a straightforward five-wicket victory in the third ODI on January 12.

Chasing a revised target of 197 off 47 balls after rain intervened in their initial pursuit of 203, the Caribbean side encountered little issues as they coasted home at the Grenada National Stadium.

Lewis, who was left stranded on 99 when West Indies won the opening game last Tuesday in Barbados, made amends with a superb 102 off 97 balls while fellow left-hander Nicholas Pooran finished unbeaten on 43 from 44 deliveries.

Brandon King struck 38 off 43 balls as West Indies recovered from the cheap dismissals of Shai Hope (6) and Sunil Ambris (6) to complete their second series whitewash in the space of three months.

Leg-spinner Hayden Walsh jr had earlier snatched four for 36 as Ireland once again failed to post a challenging total and were dismissed for 203 off the first ball of the final over.

Speedster Oshane Thomas, a surprise inclusion after not being listed as part of the 14-man squad, finished with three for 41 while off-spinner Roston Chase showed his worth with two for 53 after missing the second ODI in Barbados on Thursday.

Captain Andy Balbirnie top-scored with a polished 71 from 93 balls but he found little support, with only Andy McBrine (25 not out) and Kevin O’Brien (21) managing to get out of the 20s.

Thomas removed both openers cheaply, Paul Stirling (5) edging a pull behind in the eighth over and James McCollum (20), in his first match of the series, taken at cover by Lewis.

When William Porterfield missed a sweep at Chase and was lbw for 10 in the 18th over, Ireland were 51 for three and struggling to find momentum.

Balbirnie, batting at number three, then propped up the innings, first by adding 37 for the fourth wicket with O’Brien and then in a 42-run sixth-wicket stand with Simi Singh (10).

The right-hander struck six fours and a couple of sixes before finally perishing in the 38th over, becoming the second of Walsh’s wickets when he scooped an ordinary delivery to Chase at point.

His departure left signalled the end of any serious Ireland resistance as the last five wickets tumbled for just 50 runs.

In reply, the Windies lost Hope in the sixth over with the score on 29, hit plumb in front by seamer Barry McCarthy and leaving the subsequent review as much an exercise in desperation as it was futility.

Ambris, in his first match of the series, edged a cut at off-spinner Simi Singh behind at the end of the ninth, giving Ireland their second wicket and hope of pulling off a surprise win.

But Lewis quickly put such aspirations to rest with an innings decorated with half-dozen fours and five sixes. He reached his half-century off 41 balls in the 15th over before completing three figures off 96 balls in the 35th over by pulling fast bowler Craig Young to the mid-wicket boundary.

By the time Lewis holed out in the deep one delivery after reaching his hundred, West Indies needed just five for victory but they lost Romario Shepherd (1) before Pooran raised victory with a savage pull for four off McCarthy.