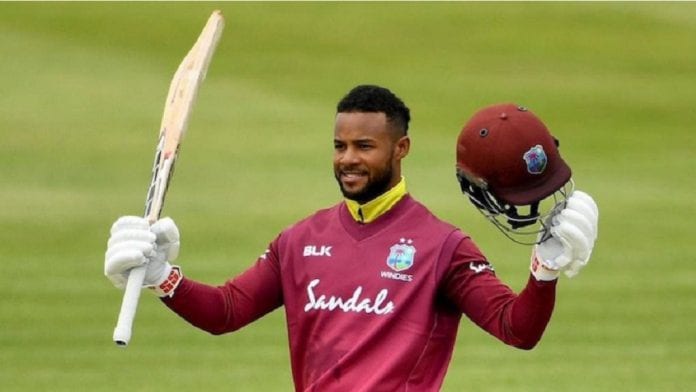 COLOMBO, Sri Lanka (CMC) — Shai Hope’s ninth One-Day International hundred went in vain as West Indies lost their composure inside the last 10 overs to suffer a narrow one-wicket loss to Sri Lanka in a tense opener of the three-match series on Saturday.

Sent in at the Sinhalese Sports Club Ground, West Indies’ 289 for seven from their 50 overs was underpinned by Hope’s stylish 115 from 140 balls – his third century in his last eight innings and fifth in the last 10 months.

Roston Chase (41) and left-hander Darren Bravo (39) both got starts but failed to carry on while all-rounder Keemo Paul lashed a 17-ball unbeaten 32 batting at number eight, to give the Caribbean side a strong finish.

Captain Dimuth Karunaratne then topscored with 52 off 57 deliveries in a century opening stand with Avishka Fernando (50) while Kusal Perera struck 42 off 50 balls.

However, it was Man-of-the-Match Wanindu Hasaranga with a lively unbeaten 42 off 39 deliveries which turned the game in Sri Lanka’s favour, in a 38-run, seventh-wicket standoff 30 balls with Thisara Perera who thumped a cameo 32 from 22 balls.

On 231 for six at the end of the 40th over and requiring 59 runs from 60 balls for victory, Sri Lanka got the better of the exchanges thanks to Hasaranga’s efforts, the 22-year-old right-hander blasting four fours and a six and Perera counting three fours and a six.

The contest could have been even tighter late on but left-arm pacer Sheldon Cottrell’s last two overs leaked 21 runs and Sri Lanka got home in the end with five balls to spare.

For the Windies, the defeat left them trailing in the three-match series, needing to win the remaining matches in order to clinch their first-ever ODI series win in on Sri Lankan soil.

Hope had earlier taken the spotlight for the Caribbean side, stroking 10 fours in his first hundred against Sri Lanka and sixth on the subcontinent.