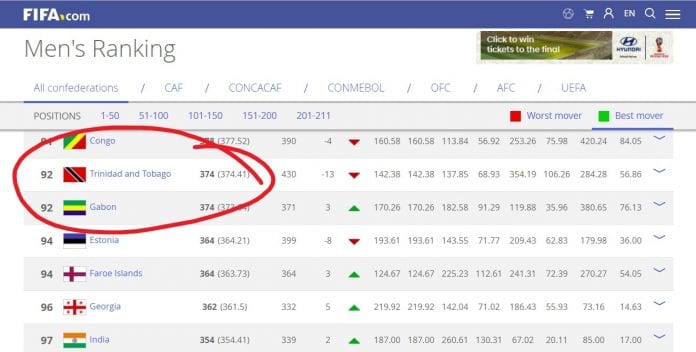 T&T, the only English-speaking Caribbean side to reach the final round of qualifying for the upcoming FIFA World Cup in Russia, fell 13 places to slip to 92 in the world.

They also surrendered second place in the Caribbean Football Union rankings, slipping to third place as Curacao gained 11 places to replace them.

T&T’s fall comes on the heels of two ordinary results in international friendlies last month when they edged Guadeloupe 1-0 in Basse-Terre and drew nil-all with Martinique in Fort-de-France.

On Tuesday, they take on World Cup-bound Panama in Port of Spain in another friendly.

Curacao with their rise, meanwhile, have moved up to 71st in the FIFA world rankings but Haiti was not as fortunate, crashing out of the top-100 to be 108 in the world. Haiti is now fourth in the CFU rankings.

There were also slides for St Kitts and Nevis who fell 19 places with Grenada tumbling 12 spots and Dominica, 10.

Antigua and Barbuda enjoyed the best movement among CFU teams, climbing 15 spots to 124th in the world and fifth in the region.

Last month they beat Bermuda 3-2 in St John’s before scoring late to draw 1-1 with Jamaica in Kingston.

The Jamaican Reggae Boyz remain the highest-ranked CFU nation at 48th in the FIFA tables.