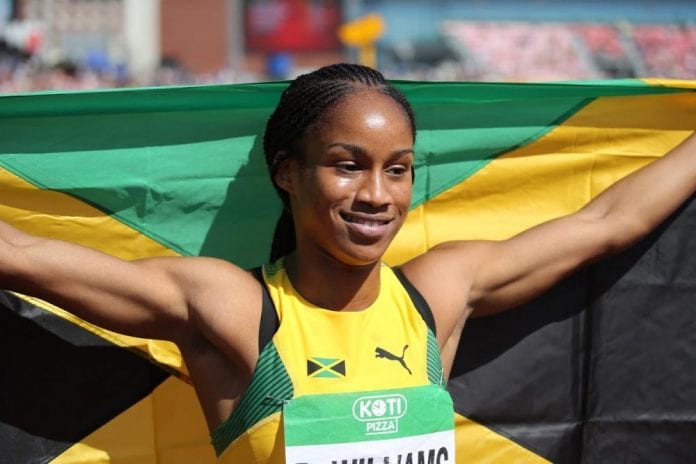 The 17-year-old star athlete, currently based in Florida, tested positive for the diuretic Hydrochlorothiazide (HCTZ), a drug used to treat high blood pressure and swelling due to fluid build-up. Williams is said to have taken a popular flu tablet, Pharma Cold and Flu which were contaminated by the diuretic.

The use of Hydrochlorothiazide is prohibited by the World Anti-Doping Agency (WADA) for its ability to mask the use of performance-enhancing drugs.

On receiving news that her ‘A’ sample had turned up an adverse finding, the tablets from the batch were sent to a lab in the United States which confirmed the contamination. Williams has since denied any malicious wrongdoings and requested that her ‘B’ sample be analyzed.

At the National Senior Championship, Williams placed third in the 100m in 10.94 seconds behind Olympians Elaine Thompson and Shelly-Ann Fraser-Pryce to secure a spot on Jamaica’s World Championships team in Doha next month.

Under the WADA and IAAF rules, an athlete faces the possibility of a maximum ban of four years for a first offense if found guilty. Despite the uncertainty that now looms over the young athlete’s career, Dr Warren Blake, President of the Jamaica Athletic Administrative Association (JAAA) is optimistic that Briana Williams could be exonerated.

“We expect that a suitable explanation will be given and that it won’t translate to a hearing where the athlete will have to make herself present because the explanation and the tests that have been done seem that they might, in my opinion, exonerate the athlete”, Blake said.

Up to this point, Briana Williams has had a stellar career and is seen as having the potential to become one of the greatest Jamaican female sprinters. She is currently the world age-15 record holder, the world youth (under-18) and age-17 record holder, and the Jamaican junior (under-20) record holder in the women’s 100 metres.

In 2018, she became the youngest girl ever to win both the 100 metres and the 200 metres at the 2018 IAAF World U20 Championships in Tampere. She holds both the Jamaican youth and Jamaican junior national records with a time of 11.01seconds and was the first Jamaican to earn CARIFTA’s Austin Sealy award two years in a row since Usain Bolt in 2004.