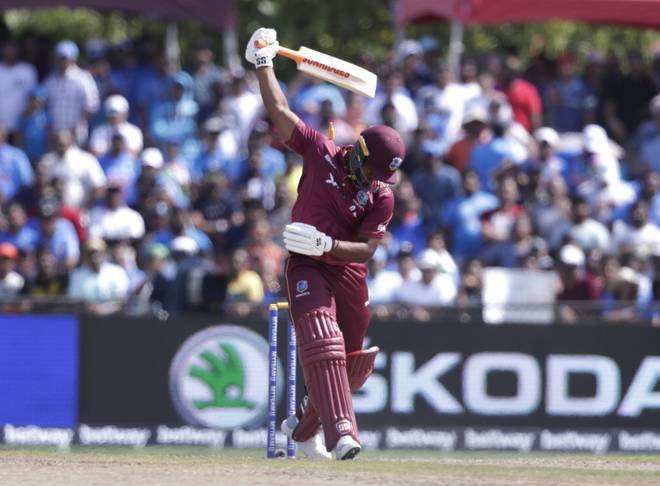 FORT LAUDERDALE, Florida, CMC – Luckless West Indies conceded their three-match series to India on Sunday after thunderstorms stalled an already stuttering run chase, leaving them with a 22-run defeat under the Duckworth-Lewis-Stern method.

In pursuit of 168 for victory at the Central Broward County Stadium, lightning and rain sent players from the field at 1:40 pm with the Caribbean side on 98 for four in the 16th over, still requiring 70 runs to win from 27 balls.

However, the rain never relented and when the contest was called off 45 minutes later, West Indies were well short of the par score of 122.

The defeat followed their four-wicket loss in Saturday’s opener and they will now head into the final T20 International on Tuesday in Guyana trying to avoid yet another whitewash to the Indians.

Hoping to level the series, West Indies were set back early when they lost both openers with eight runs on the board after three overs.

Left-hander Evin Lewis was brilliantly caught and bowled by seamer Bhuvneshwar Kumar without scoring – his second “duck” in as many days – while Sunil Narine, promoted to open in place of John Campbell, missed a heave and was bowled by off-spinner Washington Sundar for four.

All-rounder Rovman Powell then stepped up to stroke a top score of 54 – his second T20 International half-century and second in four outings – as he repaired the damage in a 76-run, third-wicket partnership with left-hander Nicholas Pooran (19).

Powell faced 34 balls and lashed half-dozen fours and three sixes while Pooran uncharacteristically struggled, requiring a whopping 34 balls for his knock and hitting just one four.

With the required run rate having climbed to beyond 12 runs per over, Pooran caved into the pressure and holed out in the deep off left-arm spinner Krunal Pandya (2-23) – Manish Pandey on the ropes pulling off the now-familiar toss-up catch.

And three balls later in the same over with just a run added, Powell, who had notched his half-century off 30 balls in the 13th over, was trapped lbw by one that pitched and straightened.

By then, the required run rate had climbed to over 13 runs per over leaving the West Indies with a mammoth task and Kieron Pollard (8 not out) and Shimron Hetmyer (6 not out) were only just getting settled when the weather ended the contest prematurely.

Opener Rohit Sharma had earlier stroked 67 off 51 deliveries as India, opting to bat first, got up to 167 for five off their 20 overs

Captain Virat Kohli chipped in with 28 and opener Shikhar Dhawan, 23, two innings that helped India to a competitive score on a pitch were free-scoring was difficult.

Rohit struck six fours and three sixes, posting 67 for the first wicket with Dhawan who counted three fours in a 16-ball knock before missing a swing at seamer Keemo Paul and having his stumps rattled in the eighth over.

Rohit found an ally in Kohli to add a further 48 for the second over as India reached 77 without further loss at the half-way stage, and then passed triple figures at the start of the 13th over when Rohit cleared the ropes with captain and seamer Carlos Brathwaite.

Fast bowler Oshane Thomas (2-27) broke the stand when he had Rohit caught by Hetmyer running back at cover in the next over and Rishabh Pant lasted just five balls for his four before also falling to Thomas in the 16th over, taken by Pollard on the third man boundary.

India’s momentum was further stalled when Kohli lost his middle stump to left-arm quick Sheldon Cottrell (2-25) but Pandya, who finished on 20 not out, then belted two of three sixes in the last over from Paul which cost 20 runs, to give the visitors strong finish.