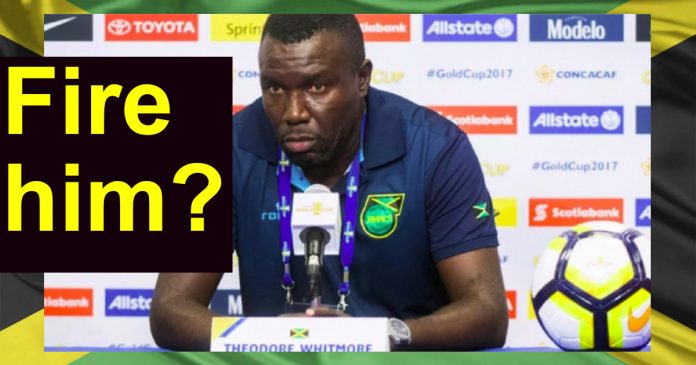 The haste with which the Rudolph Speid-led Technical Committee met to recommend the sacking of Reggae Boyz head coach Theodore Whitmore on November 17 gave the impression that the demise of the 1998 World Cup star midfielder was assured.

But more than a week later, the executives of the Jamaica Football Federation have yet to convene a meeting to discuss the technical committee’s report, which includes the much-publicized recommendation to relieve Whitmore of his job with immediate effect.

As the nation and football lovers await the rubber-stamping of the recommendation, based on events leading up to the last technical committee meeting, the silence has been deafening, to say the least.

It is a well-known fact that the job of a coach in professional sports can be transient, as it is a results-based position, which can be very lonely when times are bad.

Whitmore knows that very well. After all, he did submit a resignation letter some months ago only to rescind it when asked to do so by the Minister of Sport, it is said. He was unhappy with the support he was getting from his employers at the time, the Jamaica Football Federation, and he thought it made accomplishing his target of qualifying the team for the 2022 World Cup more difficult.

No one can argue that the team’s paltry seven points from eight games is anything to shout home about. Indeed, some can also argue about team selection, team play and team tactics during these eight games. But as one football expert said, sacking Whitmore now is not the right time.

It should have been done earlier, like when the team was humiliated 3-0 by Panama at Kingston’s National Stadium.

At that moment there was more than enough time to get in a new coach with time to know his players and get his system implemented.

There are six games remaining in this campaign, four of which are at home in the National Stadium and two away to leaders Canada and fourth-place Panama.

Some argue that the team has looked “better”, earning six points in its last four games – three draws and a win – as another indicator that the firing Whitmore now would be ill-advised. Truth be told had fortune favored Whitmore and his Boyz, they would have been in a much better place right now, but such is the nature of the sport.

The next assignment for the team is January 27 when Mexico, smarting from two-straight losses, come calling at the National Stadium. That would not be an ideal setting for a new coach with just three days or less to prepare a team for such an assignment against a badly wounded foe.

So the inactivity of the JFF executives to convene and consider the motion is no surprise to those who believe that the instigators favoring the sacking of Whitmore might not have the required numbers at the JFF Board of Directors level to carry the motion.

It was not lost on some when JFF President Mike Ricketts vented his disappointment with the returns of the team at the Gold Cup and thus far in the World Cup campaign, based on what he described as the “significant investment” from his indigent federation.

Having expressed those sentiments on the eve of the crucial game against the US, some viewed it as the president setting the stage for the ultimate firing of Whitmore a few days later. And the fact that Ricketts was represented on the last two away games by Speid, made the theory even more readily accepted as a plot to move forward with a different coach.

The conspiracy theorists have gone even further to suggest that at the Technical Committee meetings the coach’s reports for each round are usually reviewed, but for the last meeting, Speid and company didn’t even await Whitmore’s report because they had their own agenda.

One source close to the situation has suggested that those in favor of the sack underestimated the power of the players, some of whom have publicly expressed concerns about any move to dismiss the coach at this time.

The ball is still in the JFF’s court, as they are the ultimate arbiters, so until a decision is made, it’s anybody’s guess as to who will guide the Reggae Boyz when they next take to the field on January 27 against Mexico.