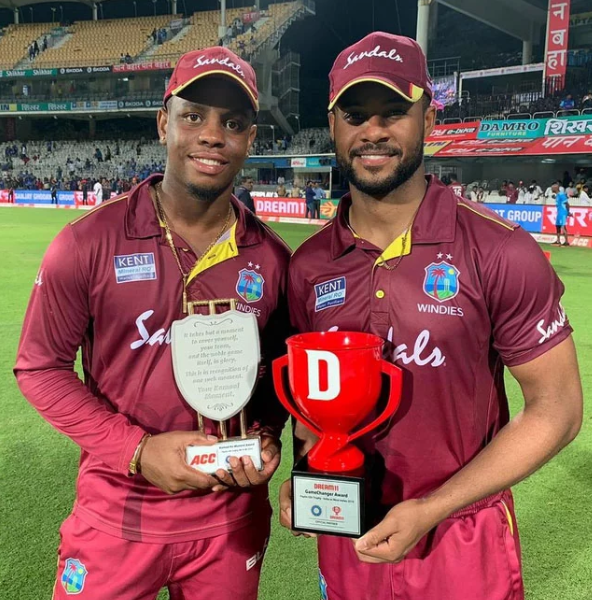 In pursuit of a challenging 288 for victory, West Indies executed brilliantly to pull off the highest-ever successful run chase at the MA Chidambaram Stadium, overhauling their target in a canter with 13 balls to spare.

Man-of-the-Match Hetmyer slammed 139 off 106 balls, striking 11 fours and seven sixes in an astonishing exhibition of power-hitting, as he marched to his fifth ODI hundred in his 40th match.

In contrast, Hope patiently carved out an unbeaten 102 off 151 deliveries, counting just seven fours and a single six, but providing the ideal counter to Hetmyer’s calculated onslaught, en route to his seventh century in the format and second in as many matches following his unbeaten 109 against Afghanistan a month ago.

Together, they posted a precious 218 for the second wicket to compensate for the early loss of Sunil Ambris for nine. When the partnership was finally broken, it was just three runs shy of the all-time West Indies record for the second wicket against India set by legends Sir Vivian Richards and Gordon Greenidge, 33 years ago in Jamshedpur.

Left-hander Nicholas Pooran arrived to put the finishing touches on the victory with an important 29 not out off 23 deliveries, helping the visitors take a giant step towards their first series win on Indian soil in nearly two decades.

Wicketkeeper Rishabh Pant had earlier top-scored with 71 off 69 balls while Shreyas Iyer got 70 off 88 deliveries as India reached 287 for eight off their 50 overs, after they were sent in.

Kedar Jadhav, with 40 off 35 balls and opener Rohit Sharma, with 36 off 56, chipped in at either end of the innings but India could only muster 71 runs from the last 10 overs in a somewhat anticlimactic finish.

Seamers Keemo Paul (2-41), Alzarri Joseph (2-45) and Sheldon Cottrell (2-46) all finished with two wickets each to lead an admirable bowling effort.

Cottrell provided the early thrust for West Indies when he struck twice in the seventh over, first removing KL Rahul for six to a catch at mid-on and then bowling captain Virat Kohli for four, to leave India on 25 for two.

Iyer quickly stabilised the innings, adding 55 for the third wicket with Rohit before putting a further 114 for the fourth with Pant, as the hosts coasted towards the 200-run mark.

But Iyer clipped Joseph to captain Kieron Pollard at mid-wicket in the 37th after striking five fours and a six, and left-hander Pant followed 18 balls later with 16 runs added after hitting seven fours and a six, picking out Hetmyer at deep square off Pollard’s slow medium in the 40th.

It was then left to Jadhav, who struck five fours and six in a 59-run, sixth wicket stand with Ravindra Jadeja (21), to provide the late runs.

Facing a required run rate of just above 5-½ per over, West Indies were set back early when Ambris played around a straight one from seamer Deepal Chahar in the fifth over and was lbw in his first ODI innings in nearly six months.

Any hopes India harboured of quickly slicing through the Windies innings were then squashed, however, as Hetmyer and Hope put the contest firmly in their side’s favour.

While Hope opted for the supporting role in a measured innings, the 22-year-old Hetmyer played with gay abandon, posting a run-a-ball half-century before reaching three figures off 85 balls in the 33rd over with a single into the deep off ineffective left-arm spinner Kuldeep Yadav.

Dropped on 106 at long by Iyer off Chahar in the 35th over, Hetmyer cashed in further by lashing left-arm spinner Jadeja for successive leg-side sixes in the 36th before perishing three overs later, Iyer redeeming himself in the deep off seamer Mohammed Shami.

Hope, meanwhile, put down on 10 by Rohit at slip off Kuldeep, crawled to his half-century off 92 balls before raising the tempo to complete his hundred off another 57 deliveries, reaching the landmark by punching Chahar for a straight six and then finding the ropes at mid-wicket off the next ball.

Importantly, he added 62 in an unbroken third wicket stand with Pooran who finished the match in style with two consecutive boundaries off pacer Shivam Dube.