Trinidadian gymnast Thema Williams has come out the winner in the first round of a multi-million dollar lawsuit against the Trinidad and Tobago Gymnastics Federation (TTGF).

High Court Judge Frank Seepersad, ruled against the TTGF on a preliminary issue which was raised by its attorneys during a previous hearing in January.

The attorneys had contended that the High Court was not the proper forum for the matter to be head and that it should instead be resolved by way of dispute resolution.

Williams is seeking $11.38 million in compensation from the TTGF for its alleged “harsh and oppressive” actions against her which shattered her dream of qualifying for the Olympic Games held last August. Williams was replaced by alternate athlete Marisa Dick who instead participated in the event.

The case was adjourned to May 15, when there will be a case management hearing. 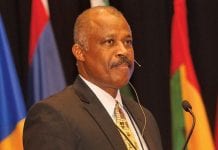