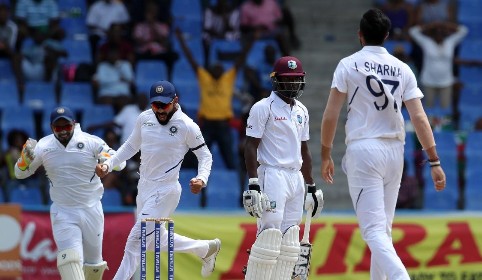 NORTH SOUND, Antigua, CMC – A staggering batting collapse on Sunday’s penultimate day saw beleaguered West Indies bundled out for their sixth lowest-ever total against India, as they crashed to a humiliating 318-run defeat in the opening Test and fall behind in the two-match series.

Set an improbable 419 for victory after India declared their second innings on 343 for seven, an hour after lunch at the Vivian Richards Cricket Ground, West Indies folded meekly for exactly 100 in their second innings, handing India their biggest-ever away victory in terms of runs.

The home side were ripped apart by a superb spell of high-class fast bowling from Jasprit Bumrah who snatched five for seven while new-ball partner Ishant Sharma finished with three for 31 and fellow pacer Mohammed Shami supported with two for 13.

Kemar Roach, batting at number nine, tried to salvage pride for the Windies with a 31-ball 38 but was the only batsman to pass 20 and one of only three in double figures.

With West Indies tottering on 50 for nine and in danger of falling for their lowest-ever score against India, Roach clobbered a four and five sixes, inspiring a 50-run last-wicket stand with Miguel Cummins (19) to save his side complete embarrassment.

The defeat for West Indies extended their wretched run of 22 Tests without a single win against the visitors and leaves them in disarray heading into the final match of the series starting next Friday at Sabina Park in Kingston.

“We’ve got a lot to be disappointed about. Obviously, we didn’t perform as well as we would like,” captain Jason Holder said afterward.

“But there’s no point dropping our heads – that’s not the solution. We’ve got to find a way to bring ourselves out of this defeat, try to rally around one another and try to come back a lot better in Jamaica.”

Ajinkya Rahane had earlier laid the groundwork for India’s dominance when he crafted his 10th Test hundred, a compact 102 off 242 balls with five fours.

Crucially, he put on 135 for the fifth wicket with Hanuma Vihari who fell just short of three figures when he was dismissed for 93, after counting 10 fours and a six in an attractive 128-ball knock.

They were brought together in the morning’s second over when captain Virat Kohli fell without adding to his overnight 51, caught at short cover by John Campbell off a leading edge to off-spinner Roston Chase (4-132), after India resumed at 185 for three.

Rahane, on 53 at the start, marched to 90 at lunch and reached triple figures in the fourth over following the resumption, with a single behind square off Roach.

Vihari, on 57 at lunch, then upped the tempo, and was in sight of his maiden Test hundred when he perished, caught behind off seamer Holder.

His dismissal prompted the declaration and West Indies then endured a nightmare 45-ball period before tea as they shockingly slumped to 15 for five at the interval.

Kraigg Brathwaite’s wretched run of form continued when he fell in the second over, nibbling at a wide one from Bumrah to be caught behind for one.

His left-handed partner John Campbell followed in Bumrah’s next over when he had his off-stump uprooted for seven and the carnage continued in the following over when debutant Shamarh Brooks walked across a full-length delivery and was lbw to Ishant for two.

Shimron Hetmyer drove at a wide delivery from Ishant and was taken at third slip for one with West Indies reeling at 13 for four, and Darren Bravo lasted all of 10 deliveries before spectacularly losing his off-stump to Bumrah for two.

There was no respite from the onslaught after the break as Bumrah removed Shai Hope’s off-stump also for two in the fourth over with the score on 27 and then shattered Holder’s stumps for eight a few overs later with 10 runs added.

Shami then joined the fun, going through Roston Chase’s defense to bowl him for 12 and then quickly despatching Shannon Gabriel in the same over to a catch at the wicket without scoring.

Roach entertained, belting three sixes in a single over from left-arm spinner Ravindra Jadeja before his cameo was ended by a brilliant running catch by wicketkeeper Rishabh Pant off Ishant.