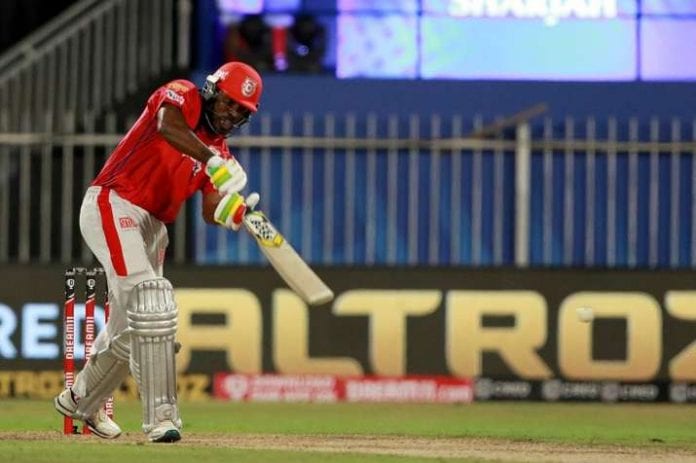 Veteran batting star Chris Gayle slammed a half-century in his first appearance in the Indian Premier League this season but his West Indies protege Nicholas Pooran was the hero, belting the final delivery of the game for a straight six to hand Kings XI Punjab a needlessly dramatic victory over Royal Challengers Bangalore on Thursday.

Only days following a brief hospitalisation for food poisoning, the 41-year-old left-hander returned to entertain at Sharjah Cricket Stadium with 53 off 45 balls as Kings XI chased down 172 to win by eight wickets off the final ball.

The game needed not to have been as close as it eventually was, however. Starting the final over requiring only two runs to win, Gayle was kept scoreless off the first two deliveries from leg-spinner Yuzvendra Chahal before getting a single off the third.

Another dot ball to KL Rahul off the fourth and Gayle’s subsequent run out attempting a suicide single off the fifth delivery, left the scores tied.

However, Pooran released the pressure by belting a Chahal full toss over the ropes, earning Kings XI only their second win to stay bottom of the eight-team league on four points.

“It was the Universe Boss batting, how could I be nervous,” Gayle joked afterwards about the tense finish.

“I thought I had it in the bag but strange things happen in cricket.”

The victory had appeared assured when captain Rahul struck a four and five sixes in a top score of 61 not out off 49 balls, in an opening stand of 78 of 48 balls with Mayank Agarwal who struck 45 from 25 deliveries.

In his first innings in 10 months, Gayle arrived at the end of the eighth over when Agarwal was bowled by Chahal, but managed to scrape only seven runs from his first 15 deliveries.

He exploded with two sixes in the 13th over off 21-year-old off-spinner Washington Sundar and punched a four and five sixes overall as he put on a valuable 93 for the second wicket with Rahul, to set up Kings XI’s victory.

Earlier, RCB gathered 171 for six off their 20 overs after opting to bat first with captain Virat Kohli top-scoring with 48 from 39 balls and Chris Morris arriving late to lash three sixes in an eight-ball unbeaten 25.