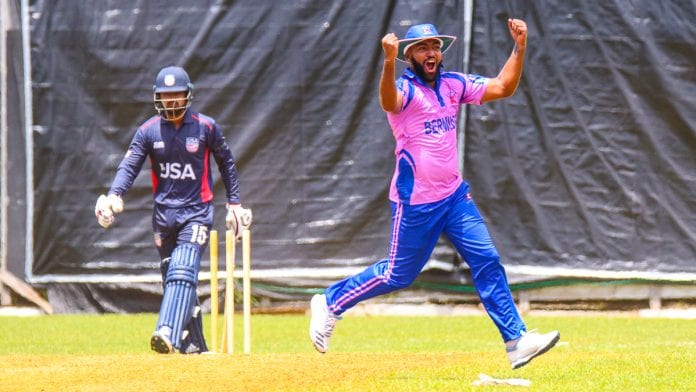 HAMILTON, Bermuda, CMC – Deunte Darrell held his nerve to hit an unbeaten 30 from 23 balls as Bermuda completed a famous double over the United States on Thursday to book their ticket to the final ICC Twenty20 World Cup Qualifier in the United Arab Emirates in October and November.

Playing at White Hill Field, Bermuda followed up Sunday’s six-run win over the US by winning by four wickets with seven balls to spare, to advance to the final qualifier ahead of next year’s T20 World Cup in Australia with two games to spare.

Canada, meanwhile, handed the Cayman Islands their fourth successive defeat in the quadrangular tournament, coasting to an eight-wicket victory in Thursday’s second-round opener to also book their place in the UAE.

After winning the toss and sending their opponents in, Bermuda held the US to 141 for nine with Hayden Walsh top-scoring with 26 as medium-pacer Onias Bascome snapped up three for 32 from four overs.

In reply, Bermuda were given a flying start by Okera Bascome, who smashed four sixes and two fours in his 16-ball 35 before he fell in the sixth over to slow left-arm bowler Karima Gore, leaving the hosts 44 for one.

Gore then removed the other opener, captain Terryn Fray, who has had a poor tournament with the bat, for eight and Bermuda suffered a major setback when Sussex all-rounder Delray Rawlins, who earlier took two wickets, was third out for 12 at 69 in the 10th over.

But Malachi Jones, having been promoted to number three, kept the scoreboard rattling along with 27 off 19 balls.

When Allan Douglas was sixth out at the end of the 17th over, Bermuda still required 25 for victory and the target was further reduced by 10 runs in the 18th over.

Man-of-the-Match Darrell then struck a six and a two and another maximum, after Onias Bascome had given him back the strike with a single off the first ball of Walsh’s over, to see the local side over the line.

New York-born Gore, 21, who has also played for Antigua and Barbuda, was the pick of the US attack with three for five off four overs, accounting for the openers as well as Douglas, while leg-break bowler Timil Patel (2-19) removed Jones and Rawlins.

In the first game, slow left-arm bowler Saad Bin Zafar shackled the Cayman batsmen on his way to figures of three for eight from four overs as the Caribbean side struggled to 91 for seven, with Greg Strydom top-scoring with 23.

Cayman then rocked Canada, removing openers Rodrigo Thomas and Rizwan Cheema for ducks without a run on the board as Alessandro Morris and Kervin Ebanks claimed a wicket apiece in the first two overs.

But that was the last success for Cayman as captain Navneet Dhaliwal struck five sixes and three fours in his unbeaten 53, while Nitish Kumar finished not out on 37 off 35 balls with a couple of fours and sixes, as Canada swept to victory with more than seven overs to spare.