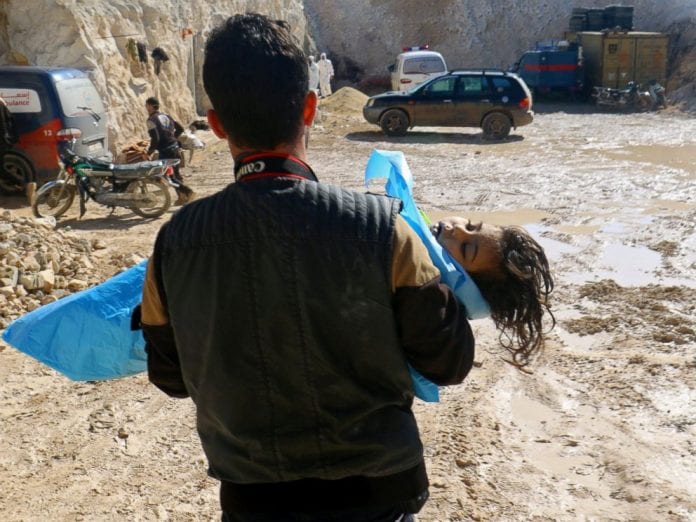 According to several Syrian reports, the missiles destroyed a warehouse of material and technical property, a training building, a canteen, six MIG-23 aircraft in repair hangars, nine planes, and a radar station. Reportedly killing six people.

“Tonight, I ordered a targeted military strike on the air field in Syria from where the chemical attack was launched,” Trump said from his Mar-a-Lago resort, where he ordered the launch.

He added, “There can be no dispute that Syria used banned chemical weapons, violated its obligations under the Chemical Weapons Convention and ignored the urging of the UN Security Council.”

Syrian President, Bashar al-Assad, released a statement that said the American missile strikes, which were response to a chemical weapons attack in Idlib Province on Tuesday was the result of a “false propaganda campaign.”

Russia, Syria’s alley, condemned the missile strike, calling it an “act of aggression.”

Russian Prime Minister, Dmitry Medvedev, said the action taken by the American was in breach of international law and their own internal procedures, and “barely avoiding combat clashes with Russia”.

However, the US claims they warned Russia one hour before the missile launch to avoid any Russian military casualties during the airstrike.

According to reports from BBC, Russia has promised to strengthen Syria’s anti-aircraft defenses after the US attack.

Bahram Ghasemi, a spokeman for the Iranian Foreign Ministry, said in a statement that his government condemned the missile strikes, saying that they would lead to “to strengthening of failing terrorists”.

Michael Fallon, the British defense secretary, was in support of the missile strike.

“One of the purpose of this very limited and appropriate action was to deter the regime from using gas in this appalling way,” Fallon told BBC reporters.

Other countries such as Isreal and Saudi Arabia were also in support of the missile attack.

US Secretary of State, Rex Tillerson, will make his first visit to Russia next week to discuss relations with the communist country.