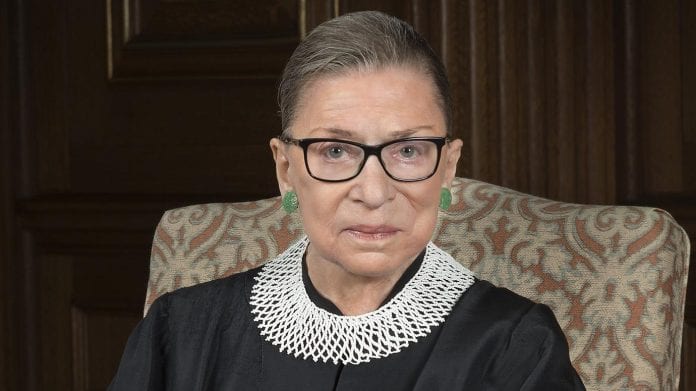 Ginsburg, the second woman to serve on the highest court in America and pioneering advocate for women’s rights, died at her home in Washington on Friday. She was 87.

The US Supreme Court announced that she died from complications of metastatic pancreatic cancer.

“The country has lost a brilliant mind, a fearless fighter, a diligent public servant who spent her life dedicated to protecting and advancing the rights of the vulnerable,” New York City Public Advocate Jumaane D. Williams, the son of Grenadian immigrants, told the Caribbean Media Corporation (CMC) Friday night. “Justice Ruth Bader Ginsburg’s legacy as a jurist was incredible – inspiring, progressive and just.

“Her impact on the court was tremendous in scope and in value as we strive for an America that lives up to its promise,” he added. “Her resilience seemed unmatchable as she worked to fulfill that promise.

“Her passing in this time, in this moment of history, is an unfathomable loss, which will reverberate with the volume of her legacy, her volumes of work, for many years to come,” Williams continued. “No matter who the next president nominates to the court, Justice Ginsburg is, and always will be, irreplaceable.”

Bichotte, the chair of the Brooklyn Democratic Party, noted that Ginsburg, a Brooklyn, New York native, passed away on the evening of Rosh Hashanah, a Jewish holiday.

She said Ginsburg started her legal career as an advocate for gender equality and that Ginsburg’s “legal opinions and powerful voice on the country’s highest court made her a role model to women across the nation and globe.”

“Justice Ginsburg’s contributions to the court will be sorely missed,” she said. “Her leadership, her wisdom and her brave fight against the illness that eventually took her life should inspire not only the country in the days and years ahead but the nation, as it confronts extraordinary challenges.

“Justice Ginsburg’s legacy must be carried on by the next justice to serve on the court,” Bichotte urged.

“Justice Ginsburg was a monumental figure in the fight for the women’s rights, and was a role model for the current and future generation of leaders,” said Dr. Eugene, who represents the 40th Council District in Brooklyn.

“She was a dedicated public servant who spent her life committed to upholding the rule of law and justice for all Americans,” he added. “My deepest sympathies and prayers are with her family during this very difficult time.”

US Democratic Congressman Hakeem Jeffries, who represents the Caribbean community in parts of Brooklyn and Queens in New York, said “our nation mourns the loss of a brilliant jurist, a trailblazer for equality and fearless advocate for gender, racial and social justice.

“Justice Ginsburg’s native Brooklyn mourns the loss of its favorite daughter, whose grit and courage have forever left their mark on America,” said Jeffries, chairman of the US House of Representatives’ Democratic Caucus. “Justice Ginsburg occupies a singular place in history for her life’s work defending our Constitution and ensuring our laws meet the promise and values of our great nation.

“She used her voice time and again to defend the Constitution and uphold our democracy for all Americans, especially the least, the lost and the left behind among us,” added Jeffries, representative for the 8th Congressional District, which includes parts of Brooklyn and Queens.

He urged the US Senate to uphold that Ginsberg’s legacy by “allowing the American people their say in who will appoint her successor on the Supreme Court.

“This was Justice Ginsburg’s most fervent wish, because nothing less than the integrity of our democracy is at stake,” Jeffries said. “Debt of gratitude does not even begin to describe what the American people owe Justice Ginsburg for her lifetime of service and fierce advocacy. “May her transition be guided by the prayers of a thankful nation and may her memory continue to be a blessing.”

New York Attorney Letitia James, a strong advocate for the Caribbean community, said “our hearts are heavy tonight with the passing of one of the most impactful justices to ever serve on the Supreme Court.

“From her time at the ACLU (American Civil Liberties Union) founding its Women’s Right Project, to her 27 years serving the highest court in the land, Justice Ruth Bader Ginsburg was a lifelong warrior in the fight to ensure justice and equality for all Americans,” James told CMC Friday night.

Former US President Bill Clinton had nominated the pioneering advocate of women’s right to the US Supreme Court in June 1993.

Many political analysts now fear that incumbent President Donald J. Trump will appoint, and the Republican-controlled US Senate will confirm, an ultra-right conservative justice to the highest court in America, drastically tilting the balance on the US Supreme Court squarely in Republicans’ favor.

Many also express trepidation that many liberal issues – like abortion, as in the landmark case, Roe v. Wade, giving a woman her constitutional right to an abortion – may be overturned in a far-right, conservative-leaning US Supreme Court.

Within hours of Justice Ginsberg’s death, US Senate Republican Majority Leader Mitch McConnell vowed to put Trump’s nominee to replace Ginsburg on the US Supreme Court.