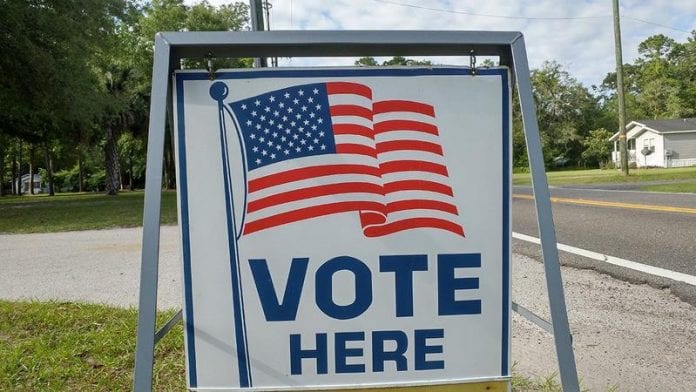 MIAMI, Florida – Early voting in Florida’s 2020 presidential primary got underway in Miami-Dade County on Monday, March 2, but over the first two days, voting seemed low as only a relatively few voters were seen trickling to several polling places.

In a one-hour period on Tuesday afternoon, just ten people were seen going in to cast their vote at the West Kendall Regional Library in South-west Mami-Dade.

With a highly competitive race for the Democratic Party nomination, one may think there would be a more robust turnout for early voting. However, those campaigning for the candidates outside the polling place in West Kendall said they were not surprised at the slow pace in the first days of early voting.

“We don’t expect voting to really pick up until after the results of Super Tuesday is known. Several candidates have dropped out since the South Carolina primary, and people are waiting to see who will still be in the race to contest the Florida primary on March 17,” was the opinion Carlos Wright, an aide to the Joe Biden campaign, expressed to CNW.

One of the early voters was Kathy Phipps, a Caribbean-American who said she went to vote early for Minnesota Senator Amy Klobuchar on Monday, only to learn when she exited the polling place that the senator had suspended her campaign. “Now my vote is wasted. I really want to see a woman elected as president, and was very impressed with Amy. It would have been better if I had waited to see which candidates would be left after Super Tuesday before I voted.”

On the other hand, Joe Biden’s dominance in the South Carolina primary elections prompted some Miami-Dade voters to make up their minds and being among the first set of voters.

Mason Dillon, a 33-year old African-American, said he was originally caught between support for Senator Bernie Sanders and  Biden, but Biden’s strong finish in South Carolina convinced him that Biden would get the black vote in the general elections and that could help him to defeat incumbent President Trump. “As a black man, I want my vote to count in electing the next American president. I think Biden will garner the cross-section of diverse votes to be nominated and then beat Trump, so I voted for him.”

Judging from the response of those who had voted at the former  Museum of Science building in Coconut Grove, the support was leaning towards Biden, and to a lesser extent Sanders and former New York Mayor Mike Bloomberg.

Priscilla Lopez, a Puerto Rican, said she was confident in voting for the former mayor, and she was certain he would “not drop out of the race before March 17. I lived in New York when Mike was mayor, he did a good job then, and will do so as president.”

A representative of the Miami-Dade Electoral office said based on the experience of the 2012 and 2016 presidential primaries, “It’s not surprising voting is slow in the first few days of early voting. People want to be sure they vote for the right nominee, and especially with multiple candidates in the Democratic race they’ll be more inclined to wait, see, then vote.”

According to the Florida Democratic Party over 300,000 Democrats have already voted by mail. Voting by mail began in the state three weeks ago. It’s expected more Democrats will vote by mail in the Florida primary this year than in 2016.