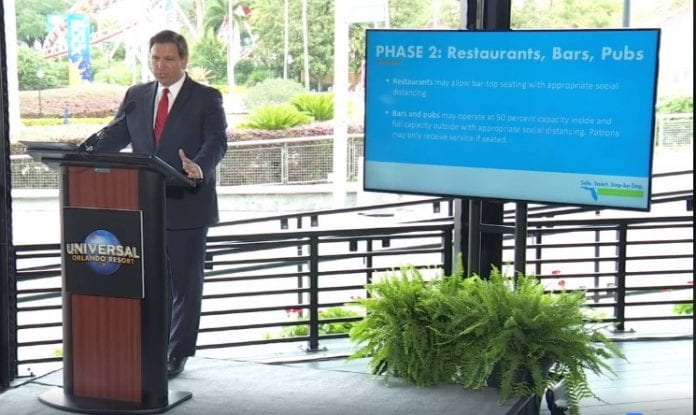 Gov. Ron DeSantis on Friday announced that the remaining two South Florida counties will move into the next phase of reopening on Monday.

Broward and Miami-Dade were among the hardest hit by the coronavirus, recording a total of more than 4,000 resident deaths since the start of the outbreak. But over the last two weeks, deaths and cases have declined significantly.

The governor said Miami-Dade County’s daily lab positivity rate for COVID-19 was 4.8% on Friday, down from more than 20% in July. Miami-Dade County remains under 10pm curfew but that is also being moved to 11pm starting Monday.

Broward’s daily lab positivity rate has been in the 3% to 4% range as of late, DeSantis said.

Broward officials say they are uncertain whether key indicators will trend upward following Labor Day weekend, and residents should remain vigilant and continue to take the necessary safety precautions.

“As the numbers permit, Broward will incrementally allow for further openings that give our residents and businesses added flexibility,” said Broward County Administrator Bertha Henry.

“We want to ensure that we use common sense when reopening Broward County to keep our community safe,” said Broward Mayor Dale V.C. Holness.

While the numbers are headed in a favorable direction, county officials say it is still important to avoid the “3 C’s” – Closed Spaces, Crowded Places, and Close-Contact Settings. Wear a facial covering when in public, and maintain social distancing of at least six feet. People violating the facial covering requirement will now receive a $100 fine.