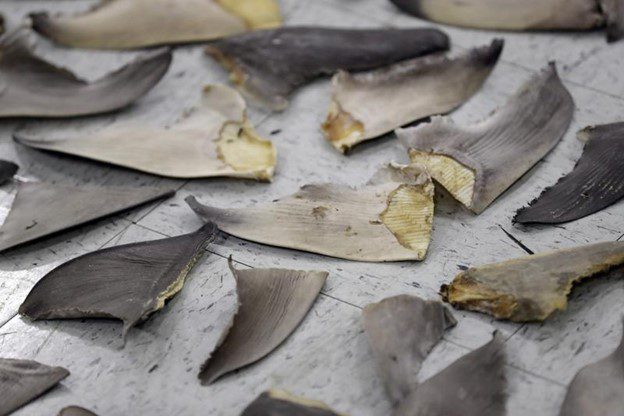 It’s one of the seafood industry’s most gruesome hunts.

Every year, the fins of as many as 73 million sharks are sliced from the backs of the majestic sea predators, their bleeding bodies sometimes dumped back into the ocean where they are left to suffocate or die of blood loss.

But while the barbaric practice is driven by China, where shark fin soup is a symbol of status for the rich and powerful, America’s seafood industry isn’t immune from the trade.

A spate of recent criminal indictments highlights how U.S. companies, taking advantage of a patchwork of federal and state laws, are supplying a market for fins that activists say is as reprehensible as the now-illegal trade in elephant ivory once was.

A complaint quietly filed last month in Miami federal court accused an exporter based in the Florida Keys, Elite Sky International, of falsely labeling some 5,666 pounds of China-bound shark fins as live Florida spiny lobsters. Another company, south Florida-based Aifa Seafood, is also under criminal investigation for similar violations, according to two people on the condition of anonymity to discuss the ongoing probe. The company is managed by a Chinese American woman who in 2016 pleaded guilty to shipping more than a half-ton of live Florida lobsters to her native China without a license.

The heightened scrutiny from law enforcement comes as Congress debates a federal ban on shark fins — making it illegal to import or export even foreign-caught fins. Every year, American wildlife inspectors seize thousands of shark fins while in transit to Asia for failing to declare the shipments.

While not all sharks are killed just for their fins, none of the other shark parts harvested in the U.S. and elsewhere — such as its meat, jaws, or skin — can compete with fins in terms of value. Depending on the type of shark, a single pound of fins can fetch hundreds of dollars, making it one of the priciest seafood products by weight anywhere.

“If you’re going out of business because you can no longer sell fins, then what are you actually fishing for?” said Whitney Webber, a campaign director at Washington-based Oceana, which supports the ban.

Since 2000, federal law has made it illegal to cut the fins from sharks and discard their bodies back into the ocean. However, individual states have wide leeway to decide whether businesses can harvest fins from dead sharks at a dock or import them from overseas.

The legislation working its way through Congress would impose a near-total ban on trade in fins, similar to action taken by Canada in 2019. The legislation, introduced in 2017 by a bipartisan group of lawmakers, has majority support in both the House and Senate.

Among those opposing the proposed ban is Elite, which has hired lobbyists to urge Congress to vote against the bill, lobbying records show.

It’s not known where Elite obtained its fins. But in the criminal complaint, the company was also accused of sourcing lobster from Nicaragua and Belize that it falsely stated was caught in Florida. The company, affiliated with a Chinese American seafood exporter based in New York City, was charged with violating the Lacey Act, a century-old statute that makes it a crime to submit false paperwork for any wildlife shipped overseas.

An attorney for Elite wouldn’t comment nor did two representatives of Aifa when reached by phone.

Overfishing has led to a 71 percent decline in shark species since the 1970s. The International Union for Conservation of Nature, a Switzerland-based group that tracks wildlife populations, estimates that over a third of the world’s 500-plus shark species are threatened with extinction.