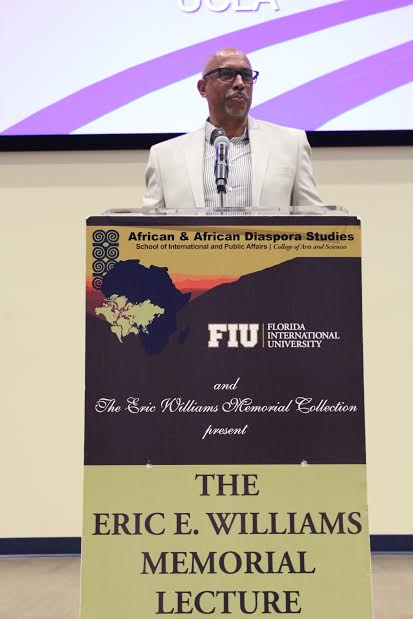 To a crowd of almost 200 that attended the 19th Annual Eric E. Williams Memorial Lecture on October 13, 2017, UCLA Distinguished Professor of Education Dr. Pedro Noguera delivered a scathing exposé of the history of the inequity of race in America, and the recent climate fostering its expansion under President Donald Trump’s chaotic and unpredictable administration.

The clear and present danger

“Do Black Lives Matter in the Age of Trump”, co-sponsored by the African & African Diaspora Studies Program at FIU, generally focused on the clear and present danger of “government approved” neo-Nazism, the overt resurgence of the Ku Klax Klan, and the unacceptable and disproportionately negative impact on black populations in the US vis a vis education; civil rights; chronic unemployment; concentrated poverty; inadequate access to healthcare, nutrition and clean water; and mass incarceration.

Throughout the Lecture, Noguera skillfully wove Eric Williams’ own groundbreaking scholarship on slavery, his insistence on and description of what he considered to be genuine participatory democracy, with the current effect of the Trump Administration on the welfare of black people.

Not content simply to detail the myriad problems besetting the subject, the noted sociologist offered striking examples of children of color, of all ethnicities, actively being engaged in achievement-based school curricula, with a heavy emphasis on the relationship between student and teacher and on community, courtesy and conduct.

Most of these are from single-parent backgrounds, often living in the most disadvantaged of neighborhoods, but with a mere $11,000 a year spent to send a child to public school, compared to the $235,000 estimated annually to jail that child, schools with struggling students must do more than simply label them as troublesome, expect them to conform and adjust or be kicked out if they don’t.

They must be organized to meet the actual needs of the students they serve.

Noguera urged the many students in the audience to be the agents of the change they want to see, to get involved in society and to resist the latest blatant attempt to stifle dissent, whether it be taking the kneel for the US flag or some other form of non-violent protest. He might well have been referring to the “meme”: “8 million Jehovah’s Witness don’t salute the flag. 200,000 Amish don’t stand for the national anthem. ONE black man kneels respectfully and all hell breaks loose. Now you know why he’s kneeling.”

His 1944 groundbreaking study Capitalism and Slavery, popularly referred to as The Williams Thesis, arguably reframed the historiography of the British trans-Atlantic slave trade (and its concomitant European incarnations) and established the contribution of Caribbean slavery to the development of both Britain and America. The book has been translated into nine languages, including Russian, Chinese, Japanese, Turkish and Korean. It continues to inform today’s ongoing debate and remains “years ahead of its time…this profound critique is still the foundation for studies of imperialism and economic development,” according to the New York Times.

Eric E. Williams was also the first Prime Minister of Trinidad and Tobago and Head of Government for a quarter of a century until his death in 1981. He led the country to Independence from Britain in 1962 and onto Republicanism in 1976.

For a report on a previous Eric Williams Lecture, visit the link: Prime Minister of St. Vincent and the Grenadines arrives in Miami to speak at Eric E. Williams Memorial Lecture