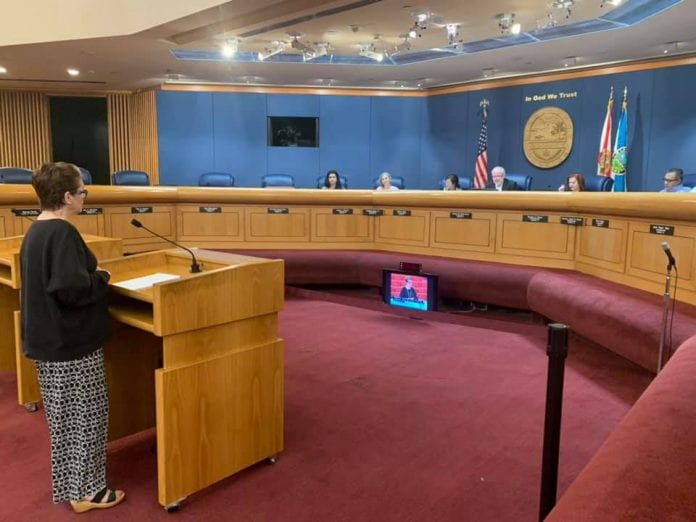 MIAMI, Florida – In an effort to inform the public about domestic violence and the work of the Domestic Violence Oversight Board (DVOV), on Jan. 8, the board live-streamed its first meeting of the year from the Miami-Dade County Commission Chambers at the Stephen P. Clark Center.

Vice Chairwoman Rebeca Sosa was in attendance; she was also the prime sponsor of the ordinance to transfer the administrative jurisdiction of the DVOB from the Mayor’s purview to the Office of Community Advocacy under the Board of County Commissioners.

Every nine seconds in the United States a woman is assaulted or beaten by her intimate partner. In 2017, more than 10% of the homicides in Miami-Dade County were related to domestic violence. The year 2018 was one of the deadliest on record in recent history, with 44 domestic violence-related deaths, representing 14-15% of all homicides countywide.

“Despite the fact that the number of reported domestic violence decreased by approximate 23% in the last decade, it is clear domestic violence and sexual assault remain a pressing public health issue, on all levels,” said Chairman of the DVOB Miguel De Grandy. “The board, through its Gaps and Needs Workgroup began a preliminary analysis of available data from key stakeholders and partners to conduct an overview of the current domestic violence continuum of care. The workgroup concluded its analysis and found significant gaps in addressing the needs of victims and survivors in our community.”

The workgroup will present its findings and recommendations to the full DVOB at the March 25, 2019 meeting for adoption and the final report will be presented to the Miami-Dade County Commission in a subsequent meeting.

The DVOB has made significant progress in 2018 by presenting its annual report and a series of recommendations adopted and acted upon by the BCC. One is the commission of a comprehensive study on the state of Intimate Partner Violence in our community. The Workgroup’s report will serve as the basis for the more in-depth study that looks at Miami-Dade County’s Coordinated Community Response to Domestic Violence.

In addition, the DVOB recommended an expedited construction of a second domestic violence shelter for those seeking safety. This new state of the art LEED Certified facility with a kennel to accommodate the family pets will be completed by the end of 2020 and will add 60 beds to the current inventory of shelter beds dedicated for those needing an undisclosed location to seek refuge.

The Domestic Violence Oversight Board serves in an advisory capacity to the Board of County Commissioners with respect to all issues affecting or relating to domestic violence. The 15-member board appointed by the Miami-Dade County Commission and County Mayor includes survivors of domestic violence, service providers, judges, law enforcement, victim advocates, and other stakeholders.