One of the fastest-growing communities in the United States, Caribbean Americans account over 3 million people, including an estimated 600,000 in South Florida. Despite the very rich history that Caribbean immigrants bring with them to the U.S., there was no one place where visitors could see a wide variety of artifacts and learn about this history—until now.

Through the initiative and determined efforts of the Island Society for the Promotion of Artistic and Cultural Education or Island SPACE, this omission is being remedied.

Plans for the development and opening of this unique museum have been in the works for several months, thanks to the determined undertaking by the president and executive director of Island SPACE, David Muir and Calibe Thompson respectively.

Within the creatively designed museum, exhibits, archives and artifacts from around the Caribbean tell the stories of the region’s robust and colorful history, while highlighting contributions to U.S. culture and economy. Visitors will enjoy the gallery’s display of fine Caribbean art and are encouraged to consider hosting their own small cultural events, meetings, and activities at the centrally located museum.

Financial resources are often the primary challenge to implementing ventures like the Caribbean American Heritage museum, but although Thomson admits that the challenge does exist, she commends the support from the local community.

According to Thompson, “Community members are encouraged to get involved in this undertaking through volunteerism, donations, sponsorships, and brand ambassadorships. Donations in the form of artifacts from around the Caribbean are highly sought after, and cash and in-kind contributions are needed.”

Muir, one of South Florida’s renowned photographers explained that “Donations are used in support of this local resource for historical and cultural information, to create interactive programs to enrich the community, and in most cases are tax-deductible.”

Over the past several months, the organizers of the museum have been very involved in collecting related artifacts from around the wider Caribbean, including the Spanish, French, Dutch and English-speaking Caribbean countries.

Cognizant of imparting the Caribbean’s history from slavery in the 17th century to the modern era, especially to non-Caribbean visitors to the museum, and the younger generation of Caribbean Americans, Thompson and the organizers have presented this eclectic history in creative format throughout the museum.

Following the soft opening, the public is invited to preview the facility from November 19. The museum will maintain limited hours of operation with no admission fees through January 2021 when the grand opening takes place.  “We are eager to start receiving guests and hearing their thoughts and feedback during this soft launch period,” says Andrea M. JohnBaptiste, Board Member. “Come January, we will have completed installation, worked out any kinks and be ready for full operations.”

Derrick Reckord and Donna Callender of Grace Foods who were present at Monday’s soft opening presented a check for $10,000. 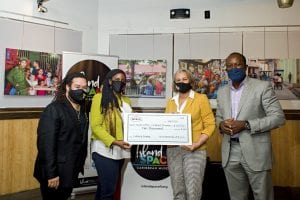 “Our support for this museum makes sense, as we are committed to supporting our customers and communities, and it is with pride that we present this check to support the Culinary exhibit,” said Reckord.