Garvey Jr, who was a noted Educator and Human Rights Advocate, died in Wellington, Florida, on December 8. The 90-year-old had been battling Alzheimer’s disease. He was laid to rest on December 22 in Florida.

Via social media, Mair said, “We extended condolences on behalf of the government and the people of Jamaica. Upon our recommendation, Broward County Commission, through former Broward Mayor Dale Holness declared December 22 as Marcus Garvey Jr Day!”

Garvey Jr’s widow, Mrs. Jean Garvey, expressed thanks to the supporters and well-wishers of their family. Members of the Universal Negro Improvement Association (UNIA) were also present at the funeral and accorded appropriate rites. 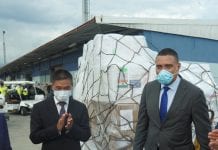