On this day in Caribbean history May 5, 1494, Christopher Columbus first set foot on the island of Jamaica. The European explorer came to the island which was then known as “Xaymaca”, from Cuba after he learned of it from the indigenous people living in Cuba.

Columbus, who was looking for gold, arrived in what is now known as St. Ann’s Bay, claimed the country on behalf of Spain with much resistance from its original inhabitants, the Tainos. After Columbus captured the island for Spain, Spain sent Juan de Esquivel to establish residency in 1509, this was the beginning of Spain’s colonization of Jamaica.

The first Spanish settlement was called Sevilla la Nueva, located on the northern side of the Jamaica. In 1523 they left that location for Saint Jago de la Vega, which is known today as Spanish Town. The Spanish remained in Jamaica until 1655, when the British attacked the island, and seized it in the name of England. 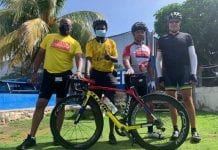 Discover Jamaica by Bike Set for 2021