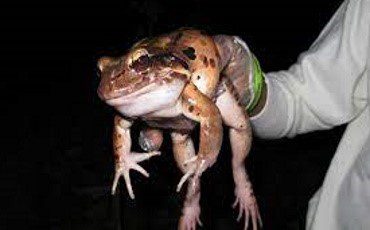 Dominicans may be without their national dish for a ”very long time” as the authorities warn of the chytrid fungus continuing to have an impact on the  Leptodactylus fallax, commonly known as the mountain chicken or giant ditch frog, a critically endangered species of frog that is native to the Caribbean islands of Dominica and Montserrat.

Wildlife ecologist at the Forestry Department, Janelle Brisbane, speaking on a radio program hosted by the Ministry of the Environment, said the mountain chicken is definitely going to be off the table “for a while” and that the fungal disease, which is soil-borne “is here to stay in Dominica,” after first being detected in 2002.

“It is in the soil, it is very difficult to get rid of and for some reason, our frogs in Dominica have been coping with it. But, for the most part, most of the frogs actually died from it,” she said noting that within one year between 2002-3, Dominica lost more than 85 percent of its mountain frog population.

“It has been a downhill battle since. But 20 years later through the conservation efforts of the Forestry Division, and regional, international partners we have actually managed to keep the frog alive. We have managed to sustain a population, we (want) people to understand and respect the mountain chicken for the national, cultural-ecological symbol that it is.

“It is going to be a very long time before we could even consider eating the mountain chicken again,” Brisbane added.

The mountain chicken frog, which is said to taste like chicken, is classified as critically endangered. This means they face an extremely elevated risk of extinction in the wild due to a drastic population decline as a result of hunting by people, volcanic activity, and the arrival of the chytrid fungus.