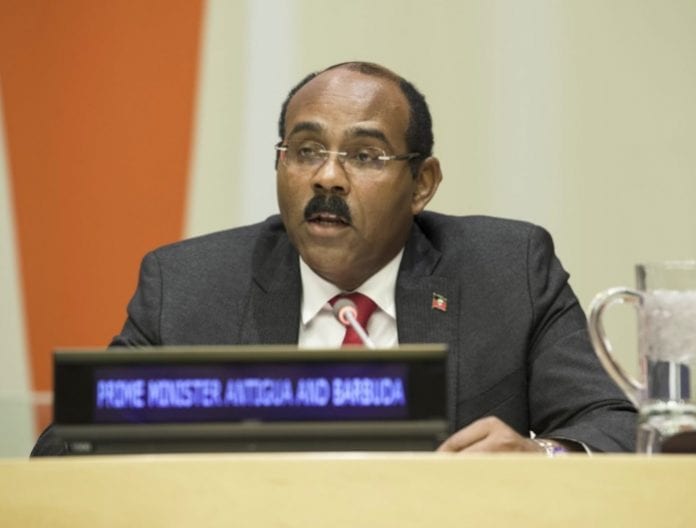 Scores of people in Antigua demonstrated outside the office of Prime Minister Gaston Browne on Monday but the government remained resolute that it would not move away from its policy to get public servants vaccinated.

The protestors, some shouting that “ PM Browne is a dictator” and that the policies “were against their human rights” urged the government to re-think the policy that indicates that, effective immediately, all officers and ancillary staff are encouraged to get vaccinated or subject themselves to a COVID-19 19 PCR test every 14 days.

Following the Cabinet meeting last Thursday, the government said that all unvaccinated frontline public sector workers who refuse to pay for twice-monthly COVID-19 tests would be required to stay home without pay.

Prime Minister Browne over the weekend said that his administration must act in the safety of all government workers, saying also that he was prepared for the political fallout from the policy.

The Chief of Staff in the office of the Prime Minister, Lionel Hurst, said that at least 30,000 people here have so far not taken the vaccine as the government moves to ensure herd immunity as soon as possible.

The Prime Minister’s Chief of Staff, Lionel Hurt, speaking on Observer Radio on Monday, defended the policy, saying “the government of Antigua and Barbuda has invited every resident and citizen to take the vaccine and 30,000 people have remained obstinate and have not taken that vaccine and they threaten to undermine our tourism as well as the others in Antigua and Barbuda requiring hospitalization and even to face death.

‘As a consequence, we asked gently for them to be vaccinated. There is no harm in being vaccinated, there is no danger to them, except imagined dangers and no injuries will result and therefore they ought to take the vaccine”.

Hurst said that the ABPSA has not been cooperative in the move to get people vaccinated saying it has “demonstrated an unwillingness to hold any consultation with the government.

“They make the claim that we have not engaged them, but we have tried on every occasion to bring them into the discussion …and they have indicated clearly they are not interested because they believe we are going to make the decision that will benefit the people of Antigua and Barbuda.

“As a consequence, they won’t be able to point to any failure on our part (and) they have been hostile to the Antigua and Barbuda Labour Party government under the Honourable Gaston Browne,” said Hurst, insisting that the government does not intend to change its policy.

“No Sir, we are trying to get 30,000 people who have not gotten vaccinated to volunteer for the vaccination. You have got to vaccinate, otherwise, you will not only force a danger to your family but also to the tourists, those on the front line.

“A lot of jobs depend on the folks coming to Antigua and Barbuda feeling safe and wanting to return…and therefore we must ask all people on the front line to get vaccinated and not to delay doing it,” he added.

Antigua and Barbuda has registered 43 deaths and 1, 428 cases of the virus since March last year.