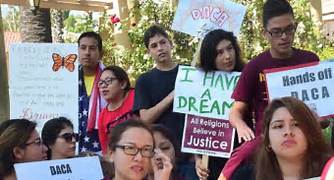 Eligible DREAMERS should apply for DACA now, in case program is terminated.

Top officials met in Washington last week to discuss the fate of the former Obama administration’s DACA (Deferred Action Childhood Arrivals) program for Dreamers. As the deadline for a decision next month nears, officials won’t comment on their deliberations. However, Immigrants’ rights activists are gearing up for a fight to protect DACA eligibility through all available means.

Republicans threaten to sue Trump
The deadline on Trump’s decision whether to continue or terminate the current DACA program results from the intent of Republican officials in ten states to battle Trump in the courts if he decides to protect DACA Dreamers. With this as the background, most critics do not see Trump having the backbone to defy his own supporters by continuing with a program that he promised them he would terminate on “day one.”

This anticipated measure is estimated to affect some 800,000 current DACA holders, plus an additional 200,000 more Dreamers who become eligible each year. As a result, many experts are urging all Dreamers eligible to apply for DACA to do so immediately, so that the USCIS will have received their applications before the program is terminated. The understanding is that those who have applied, whether or not yet approved, will still qualify for benefits in the event DACA is canceled.