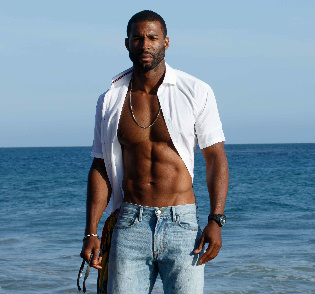 The Grand Marshal for the 2017 Miami Carnival which begins at the end of September through October 8 is Robert Christopher.

Riley, an actor, hails from the Flatbush section of Brooklyn (NY), but has deep Caribbean roots. He was raised by his Trinidadian mother and grandmother, and his father is from Barbados.

He graduated from Brooklyn Technical High School in 1998, before attending Lehigh University (’03) in Bethlehem, PA., for his B.A. in Theatre. While attending Lehigh, Riley was cast in the role of ‘Walter Lee’ in the play, “A Raisin in the Sun” and later went on to co-write along with Kashi Johnson (his professor and mentor), “Untold Truths: Why We Always Sit Together”.

While completing his degree (’06), he was cast in several independent films as well as numerous commercials and print ads. In winter 2006, he landed a role in August Wilson’s “Fences, “ which had a 6-month, 3-city tour (Hartford/Dallas/Portland).

In 2007, he was cast as ‘Jeremy’ in a second August Wilson production, “Joe Turner’s Come and Gone” at Baltimore Center Stage.

As luck would have it, Riley was returning from a modeling job, on an off day from “Joe Turner,” and received a call to audition for the 2008 Broadway production of “Cat on a Hot Tin Roof”. He was cast to play the role of “Brick” as an understudy for Terrance Howard, which he performed for three weeks in addition to his nightly role as “Brightie”. He starred opposite, James Earl Jones, Phylicia Rashad, Giancarlo Esposito and Anika Noni Rose and received nightly standing ovations, as the production ran from September ’10 through May ’11.

Transition from stage to television/film

Relocating to Los Angeles, he made an easy transition from stage to television and film. landing roles on VH1’s, “Single Ladies” and Tyler Perry’s “For Better or Worse”.

Other shows he has appeared on include, “Law and Order: Criminal Intent”, “Nurse Jackie”, “Royal Pains”, “Damages” and “White Collar”.

In April 2012, he was cast as ‘Terrence Wall’ (a series regular) in VH1’s “Hit the Floor”. The show premiered Memorial Day 2013 to phenomenal reviews and gained 4 million viewers every Monday in its first three seasons, making it the #1 new scripted series on VH1.

Currently Rob can be seen in WGN hit show Underground as the character Hitch, the abusive love interest of Ernestine played by actress Amirah Vann. Riley also had a recurring role in season 5 of the CBS show Elementary as Roy Booker.

Fall season we will see more of Riley in the CW’s new show Dynasty a reboot of the iconic 1980’s soap opera as Michael Culhane.

Currently Riley has directed is first music video for eOne’s recording artist Demetria McKinney and produced a docu-series with his own production company Hollywood Massive, showing his travels to different islands and cities covering culture, carnivals, and major festivals, with the aim of raising cultural awareness throughout the globe.

Parade of bands and concert

Catch Christopher Riley on Sunday, October 8, 2017 for the 33rd annual celebration of Miami Carnival. The parade of bands and concert will be held at the Miami Dade-Fairgrounds (10901 SW 24 St, Miami, FL 33165) with the gates opening at 11am.