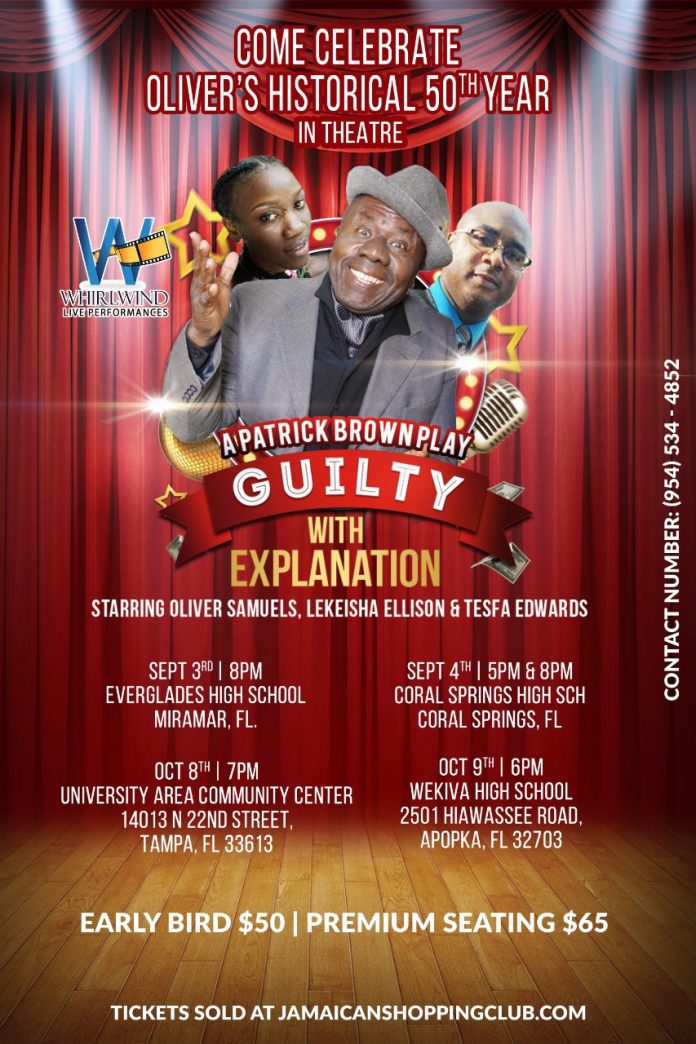 Veteran comedian and entertainer Oliver Samuels will return to South Florida for the Labor Day weekend with his show Guilty with Explanation. It’s almost impossible to be Jamaican and not be touched by the humor or humility of Oliver Samuels. Most Jamaicans agree that the image of  Oliver with ear muffs in his winter coat, no visa, and overloaded with extra pieces of luggage of “pudden”; is the funniest moment in the history of Jamaican motion picture.

When it comes to magical moments on stage, there are just too many to mention. We have all laughed, some of us have been brought to tears, and a few have admitted to have lost control of their bladders when our King of Comedy delivers a punch line.

One would think that Oliver would want that which has been given to many, like statues or parks named after them, or even a Theater; but if Oliver was asked what he would want from his fans who have given years, he would’ve replied, tell them to just show up and enjoy – “I am at my happiest when the fans enjoy the show” a very emotional Samuels said.

After years of consecutive sold-out Labor Day shows, it is expected South Florida will honor Oliver Samuels’ for this historical show. There are three shows; one in Miramar and two in Coral Springs on Labor Day. The Miramar show will be held on Saturday, September 3rd at 8pm, and the two shows in Coral Springs on Sunday September 4th at 5 and 8 pm. Tickets available in your