Director Terence Nance shares his views on the Oscars boycott 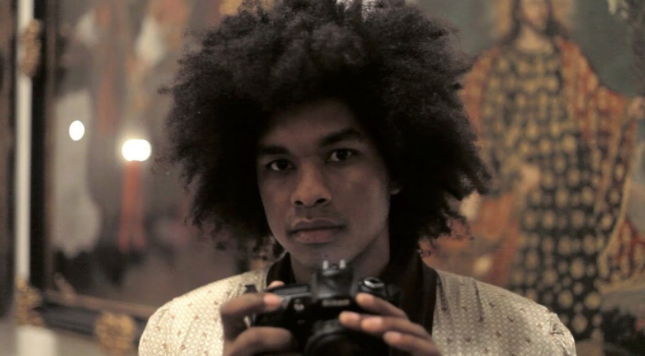 Acclaimed director, Terence Nance whose Oversimplification of Her Beauty made a huge splash in 2012, and who has had a string of hits following, recently shared his views on the #Oscarssowhite, calling for reparation.

This year, his film Native Son, directed with hip hop artist Blitz the Ambassador, is a part of the series.  The film and Nosarieme Garrick’s My Africa Is form the season finale of the nation’s only public television documentary series about life, art and culture across the African Diaspora. The films premiere tonight on WORLD Channel.

National Black Programming Consortium (NBPC), which executive produces the series, asked Nance for his thoughts on his film and the #OscarsSoWhite controversy.

NBPC: Your film is a narrative film, an exception for AfroPoP as a documentary series. So much has come to light in recent years about outstanding child actors from Quvenzhané Wallis to Abraham Attah to Jacob Tremblay. How did you find your lead actor and how does one know when they have that really special talent?

NANCE: Finding Edward was an act of God. I don’t think we saw anyone else for the role. He came to us through one of Blitz’s friends from high school and when we talked to him we were just overwhelmed by his charisma and intelligence. He was a profoundly giving kid who was wise beyond his years.

NBPC: How did you and Blitz the Ambassador come to work on this film together?

NANCE: We were roommates and friends first and had worked together on making the album. I was an executive producer on the album with James Bartlett and we all worked together for years on that. The film was really an extension of that process — the process of making a piece of art about going home / finding home.

NBPC: Native Sun looks like both a documentary and narrative film — a hybrid, if you will.  Can you talk about your creative process and vision for this film?

NANCE: I think for us we were trying to make a surrealist film using a cinema verité process which is what gives the documentary feel. We were making the film out in the world.

NBPC: The funeral scene was quite the spectacle. Are stilt walkers a part of the Ghanaian funeral experience?

NANCE: They are not at all but I think that the funeral experience in the film was more about creating a visualization of what a homegoing experience would feel like.

NBPC: What does it mean to have your film be a part of AfroPoP?

NANCE: It’s an honor and privilege. When you make something as strange as Native Sun you can fall into the trap of thinking that not many people will see it so the fact that it will be broadcast on TV nationwide really means a lot to us as artists trying to craft original/avant-garde work.

NBPC: With the uproar over #OscarsSoWhite, what do you think the solution is for ensuring the next generation of filmmakers gets its chance to tell its stories and to be acknowledged for its excellence?

NANCE: Reparations. Black people, and people of color generally, have been marginalized by the movie industry since its inception. At the same time, the entertainment industry has generated massive profits from our stories, our images, our music, our culture. In the process they have defrauded a countless number of Black entertainers. The only solution that I feel is fair is for the industry to enact a comprehensive system of restitution and reparations to repay us for the damage done by years of intentional subjugation and marginalization.

That would look like a not-for-profit film fund that is contributed to by all the major studios that would be earmarked for the production and marketing of Black films. All profits generated by these films should go to the Black creatives who make the films. That’s one solution that depends on a white supremacist system becoming interested in dismantling itself, so I’m not so confident that it is a solution that will actually come to pass. That said, it’s the only solution that even approaches the ideas of justice and fairness.