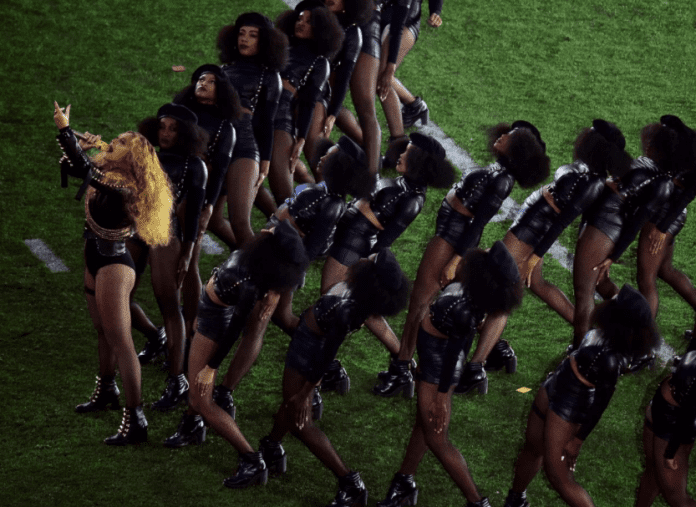 Beyonce issued a strong political statement with her halftime show at Super Bowl 50  on Sunday with backing dancers dressed as members of armed rights group the Black Panthers.

The superstar brought the dancers on for her new single Formation which is being widely touted as a rallying cry for the Black Lives Matter movement. The video, released a day before the Super Bowl, seemed to essentially form Beyoncé’s own declaration that her position in the spotlight hasn’t fractured her own political consciousness; an idea which continued on into her performance of the song at the Super Bowl 50 halftime show.

At one point during the song, the supporting performers formed an ‘X’ on the field – thought to reference black rights campaigner Malcolm X – and then raised their arms in the air in a gesture referencing the black power salute by Tommie Smith and John Carlos at the 1968 Mexico City Olympics.

Not the first time to “voice” her opinions on Black Lives Matter, during the Trayvon Martin-George Zimmerman trials, the entertainer as well as her husband Jay Z, lended support to the family of Trayvon Martin, marching with them after Zimmerman was able to walk away a free man.

Beyonce’s performance was well received by many, who voiced their approvals on Twitter, however, some didn’t find the entertainer’s performance appropriate.

Former New York City Mayor Rudy Giuliani slammed the songstress’ performance performance. The politician felt Beyonce was disrespecting law enforcement with her performance. He acknowledged that there have been bad incidents, but on the whole he felt police should be respected as they try to protect communities. “I thought it was really outrageous that she used it as a platform to attack police officers who are the people who protect her and protect us, and keep us alive,” he said.

However, Beyonce is not the first artiste to address issues facing the the Black community. Reggae legend Bob Marley, used his voice to sing about political and social causes.  Through his music Marley supported the peoples of South Africa’s struggle against apartheid most notably in his song entitled “War” which was a speech penned by Haile Selassie, the then Ethiopian Emperor who is considered the spiritual leader of the Rastafarian faith, the faith to which Marley ascribed. The song speaks to the fact that there will be no peace until all persons regardless of race or class are treated equally.