It was a night filled with good music and festive cheer this past weekend at Willie Stewart & Friends’ first annual “Rhythms for the Season” concert, at the Rebar Lounge in Davie.

This year’s concert was full of entertainment, as a slew of talented artists joined percussionist wonder and founding member of Third World, Willie Stewart, on stage. Stewart was joined by band members Leroy Romane and Vinnie Hamilton on keyboard, father/son duo Ricky Walters on base and son Richie Walters on guitar. Upcoming South Florida-based reggae girl group, 3B4JHOY (made up of dynamic sisters Claudette, Dominique and Heather) also lent their pitch-perfect angelic harmonies, as well as leading on thrilling renditions of their own music.

The night was also full of surprises, with a fantastic selection of surprise guests. Lead guitarist and singer O’neil “Honey P” Peart and drummer Krispercs Upnah of hot Jamaican reggae group, No-Maddz, thrilled the crowd. The performance also went up another notch thanks to the musical stylings of Shaka Pace on base and Moodie from Rebar on sax. All were rallied by stellar MC of the night, Kalib Thompson. 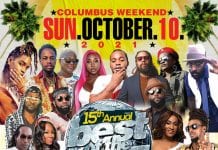